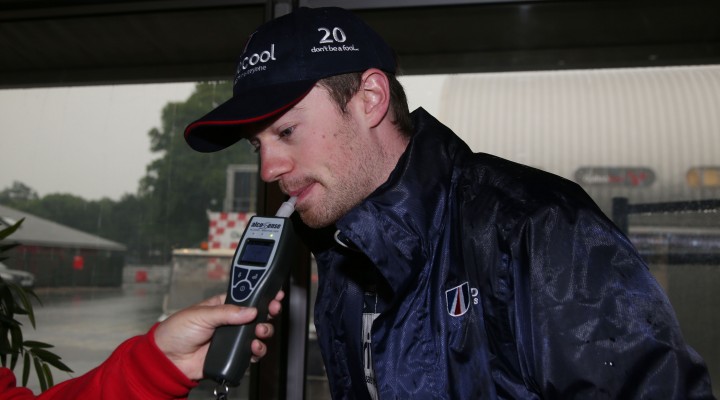 The Dunlop MSA British Touring Car Championship commenced its newly introduced mandatory breath-testing at Oulton Park last weekend (7/8 June), a procedure that will now be carried out on every day at every event to ensure that all competing drivers and senior championship officials are free from the effects of alcohol.

Following the announcement last month that the BTCC was set to become the first motor racing series in the UK – and likely the world – to introduce such mandatory testing, it further bolstered its stance by confirming a ‘zero tolerance’ policy.

Using AlcoSense breathalysers – the BTCC’s Official Alcohol Testing Partner – all drivers and senior championship officials produced a zero reading in the first ever tests last weekend, meaning all personnel involved were free from any effects of alcohol.

Given the professional, sporting and safety aspects of the BTCC all those tested were fully expected to be free from alcohol but the procedures have, and will continue to, send out the message that any alcohol consumed the night before driving may leave some residual alcohol in a person’s system and could have a detrimental affect on the person’s performance.

It is hoped that by testing well-known professional racing drivers it will also raise awareness to the greater public on the dangers of ‘morning after drink driving’, which is often committed unintentionally after an evening of moderate drinking.

Some 40% of people are estimated to have driven the morning after, unaware they are still over the drink drive limit, whilst the occurrence of ‘morning after drink driving’ road accidents has risen from 13 per cent to 21 per cent of all drink drive accidents.

The BTCC, in partnership with AlcoSense breathalysers, has now incorporated this process into its operational procedures as well as in its rules and regulations for all competing drivers and senior officials.

BTCC Series Director, Alan Gow, said: “The first weekend of our mandatory breath-testing was meticulously planned by our staff and AlcoSense. It was fully endorsed and supported by those being tested, and proved to be an extremely smooth, swift and successful process. This now mandatory practice has been integrated into our normal operational procedures at race weekends and will be carried out every day at every event – think of it as driver scrutineering.

“We obviously expected all participants to provide a zero alcohol reading, but it doesn’t change the fact that anyone who had of failed, or does so in the future, will not be allowed to race and may face further repercussions.

“As the BTCC has such a huge global fan base we also believe we’re delivering an important road-safety message to the greater public. Accidents involving ‘morning after drink driving’ have risen at an alarming rate and as the biggest motor sport series in the UK we have a passion and a responsibility to set industry standards as well as contributing to road-safety education. We’re pleased with the way things went at Oulton Park and expect the same success at all future events.”

AlcoSense Managing Director, Hunter Abbott, said: “Having led much of the research into ‘morning after drink driving’ over the past seven years it’s great that the BTCC is so passionate about raising awareness of these issues. It’s so easy to be over the limit the morning after that mistakes can happen. The BTCC, as the UK’s premier racing series, is setting a precedent on driver safety and AlcoSense is extremely proud to be its official testing partner in an industry first.

“The procedures put in place for Oulton Park were carried out with the highest professionalism and were accomplished efficiently within the series’ normal race weekend procedures. We believe this process has proved and will continue to prove a huge success and we’re delighted to be a part of it.”