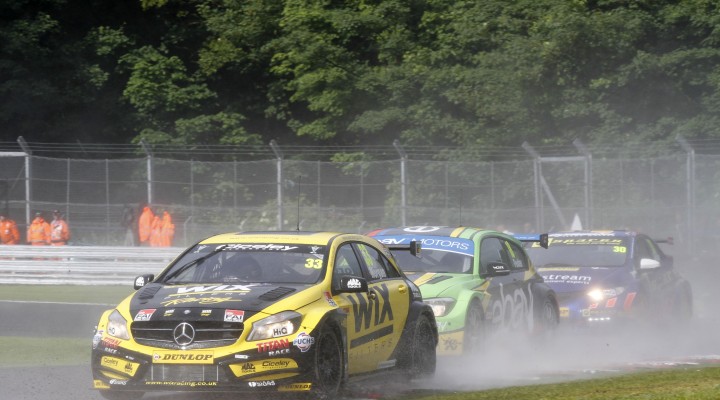 Following rounds 10, 11 and 12 of the 2014 Dunlop MSA British Touring Car Championship it is still Alain Menu who leads the way at the top of the Jack Sears Trophy standings, though it is further down the standings table that the biggest shake-ups occurred. The trophy will be awarded to the independent driver that makes up the most positions from their starting grid slots throughout the year, with the added curve ball of having all your improvements removed from a weekend if you receive a grid penalty.

So far it’s been the Chrome Edition Restart Racing Volkswagen of Menu and Exocet Racing Audi A4 of Rob Austin heading the field, but with tricky mixed conditions all weekend at Oulton Park there have been some dramatic moves up and down the table.

With the emphasis on making progress during a race, the Jack Sears Trophy adds an interesting spin for drivers who have had a difficult time in qualifying. Adam Morgan is the prime example from Oulton Park – his mid-session crash left him down the order on Saturday afternoon knowing he’d have a tough Sunday from 25th on the grid. After the session he commented: “I was gutted to be caught out by the conditions. The team had made significant changes and I was just starting to explore the car’s limits when I unfortunately found them!”

The upshot of this was that the Mercedes driver made the best progress forward on the tight Oulton Park track, with no fewer than 15 moves on other drivers in the three contests. This has rocketed the Lancastrian from 16th to sixth on the JST table, putting him in contention for the crown and showing that even on difficult weekends there’s a reason to fight for every place right until the chequered flag.

Behind the leading duo of Menu and Austin, Rob Collard lies third but like Menu didn’t score at Oulton because of a penalty. Collard’s eBay Motors team-mate Nick Foster made up a wealth of places – 13 in total – to move to fourth in the standings.

With Croft next up on the calendar there’s sure to be yet more movers and shakers in the Jack Sears Trophy, as the big braking zones provide several opportunities to snatch positions from your rivals.