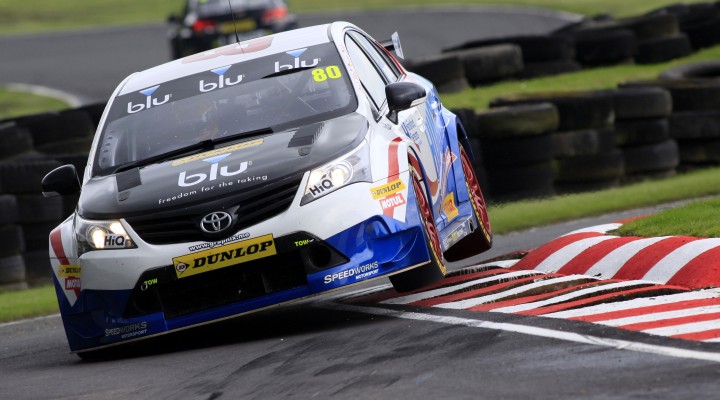 Speedworks Motorsport’s preparations for the fourth outing of the 2014 BTCC season were turned upside-down less than a week beforehand following a sizeable shunt for team principal Christian Dick. Only seven days later, the Northwich, Cheshire-based operation was celebrating its finest result of the tin top campaign to-date.

Dick was leading his class in a Ginetta G50 in the Zandvoort 12 Hours in the Netherlands when he found himself an innocent and helpless passenger in somebody else’s accident. A 100mph impact left him badly injured and laid up in a Dutch hospital with wife Amy at his bedside – just as they should have been putting the finishing touches to Speedworks’ most important event of 2014 on home turf at Oulton Park.

“It certainly wasn’t the way we normally like to approach race weekends!” quipped Amy. “Over the years, we’ve worked very hard to try to de-stress in the days leading up to meetings by making sure we are fully organised and on top of everything so that we can concentrate on polishing the finer details – but obviously all of that was thrown into disarray this time!

“That said, the morale inside the team was amazing and everybody involved was absolutely fantastic. Our engineer, Ronge, cancelled his plans to go and work in America and stayed behind to run the workshop for us. When things like this happen, you realise you’re more than just a team – you’re a family. The boys took care of absolutely everything – I think we might be redundant now!

“Oulton Park is a key event for us. Our title sponsor Hughes Safety Showers is local, we are local and we have a lot of history there. We ended up with well in excess of 100 guests to look after, alongside a lot of friends and family who came to support us. That requires plenty of hard work, and going into the weekend, the boys were determined that everything would go well. There was very much a sense of wanting to do Christian proud – which they emphatically did.”

Speedworks’ testing plans during the post-Thruxton break had been somewhat frustrated by poor weather conditions as they sought to refine their Toyota Avensis in race trim, but the progress that had been made nevertheless shone through.

Rookie Tom Ingram qualified the car an excellent ninth on the 31-strong BTCC grid and the 20-year-old maintained that position in race one before improving to seventh in race two – Speedworks’ highest finish of the campaign thus far.

An even better result looked to be in prospect in race three, as triple Ginetta Champion Ingram lined up on the front row of the reversed grid – but fuel pressure sensor failure on the opening lap cruelly robbed the squad of a golden opportunity to reach the rostrum.

Still, having tallied nine points-scoring finishes from 12 starts – six of them impressively inside the top ten – and with Speedworks moving up to eighth in the teams’ standings amongst the 21 protagonists and Ingram gaining ground to 12th in the drivers’ classification, Amy Dick acknowledged that a week that had begun in nightmarish fashion had ended with significantly more cause for cheer.

“The first two races were hugely encouraging, although race three was obviously massively disappointing as we were in good shape and the item that failed cost literally just a few quid,” concluded Amy. “It was completely out of our control and simple bad luck – there was nothing we could have done to prevent it from happening.

“Tom is perceptibly becoming more comfortable and confident in the car – and that is translating across into feistier on-track performances. The overwhelming feeling inside the team right now is one of excitement. There’s a tremendous fighting spirit here at Speedworks, and we have every reason to be optimistic about making further inroads. We are getting stronger and quicker with every race – and soon, hopefully, we won’t need to rely upon reversed grids to look at challenging for the podium…”