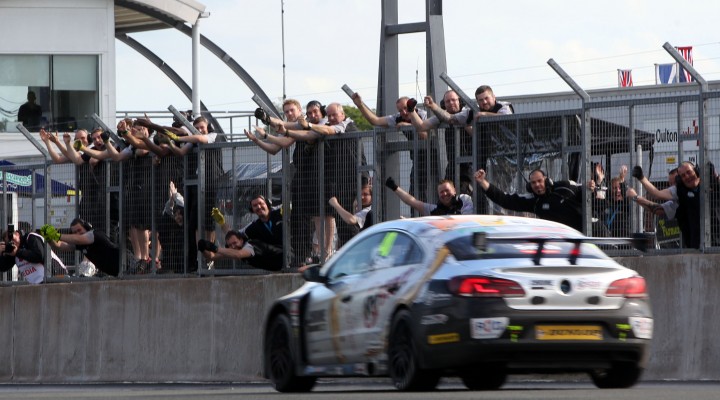 It has been a whirlwind 18 months or so for the popular Warren Scott culminating in the Team BMR boss realising a dream when Aron Smith won the squad’s first ever race in the final encounter at Oulton Park.

Scott only contested his first BTCC race at Brands Hatch in 2013, running (and driving) a modest one-car team in the Jack Sears Trophy. He quickly progressed to the NGTC ranks by mid-season before deciding to tackle the huge undertaking of running a four-car squad for 2014. “I came to watch touring cars before having any involvement and I immediately got the bug,” said the former motorbike racer.

That wasn’t enough for Scott, however, as he then went on to delight BTCC fans around the world by making double champion Alain Menu his first driver signing. He followed that by completing an eye-catching quartet of Aron Smith and Jack Goff to join himself and Alain in the line-up. A number of significant engineering and managerial personnel were also added to the former Team HARD outfit and the scene was set for the squad’s BTCC bow.

Despite playing down the chances of his team during its maiden campaign the competitive and professional determination of Menu in particular during the season opener had Scott reassessing the task at hand. “I didn’t really expect us to be this competitive so soon and I’ve got drivers who want to win as soon as possible,” he admitted to btcc.net at the second event of the year.

Menu’s fight back to fifth at Brands, Goff’s identical result at Thruxton and Warren’s own points scoring finishes had all been memorable moments for the team up until Oulton, but nothing could prepare them for the final showdown in Cheshire.

Despite Smith benefitting from a front-row reverse grid draw, although he wouldn’t have if he hadn’t scrambled past the MG of Sam Tordoff on the last corner of race two, the Irishman went on to produce arguably the drive of his BTCC career.

Pole position in race three is not always the dream it’s portrayed to be as many have faltered with quicker cars behind them, but the pressure didn’t faze Smith and as a gaggle of cars squabbled behind he kept his head to score his second ever BTCC victory and the first for Team BMR.

“I couldn’t believe it,” said Scott. “It’s a good job they didn’t tell me over the radio during the race that he was winning as I might have had some problems!”

Scott was busy securing another impressive points finish himself but it was Smith’s performance in the VW CC that really had him purring.

“It’s just a credit to the whole team,” he continued. “The boys have worked so hard putting a reliable car together throughout the season and we’ve been slowly chipping away at it. We’ve had the speed but we needed the luck and now the luck has come.

“Aron is a fantastic driver – he’s been confident the whole time. He’s been fast, the car has been fast but we just need it to come together in qualifying to set us up for the races. We’ve always had belief and now Aron’s proved it, and we hope to have more podiums before the end of the season.”

Such is the spirit within the outfit that Aron was also quick to declare his victory ‘for the team’ – a win that may have just raised expectations for the rest of the campaign. In a squad that also includes a tin top legend in Menu and young talent like Goff you’d imagine they have every chance of returning to the rostrum before the year is out.