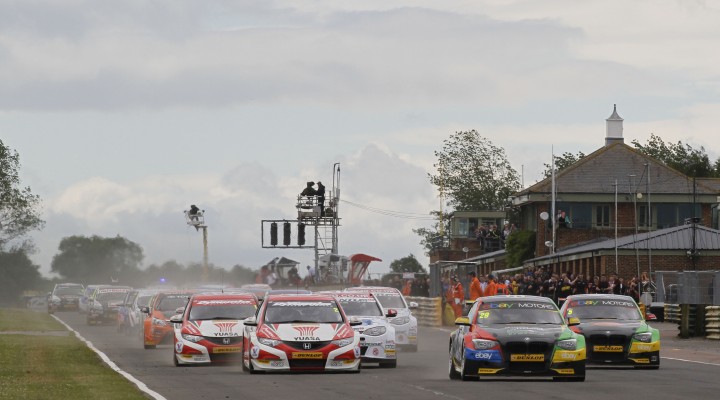 Yorkshire is set to become the central hub of speed over the coming weeks as the Dunlop MSA British Touring Car Championship roars into the Croft Circuit (28/29 June) just a week before the county hosts the start of the world’s most famous cycling race – the 101st edition of the Tour de France.

First up it’s the turn of the fiercest flame-spitting touring cars from the pinnacle of UK motor sport, driven by 31 hard-charging racers, including seven of the finest tin top champions. Whilst the Tour de France will display its own spectacle of speed in July there will be no quicker sight than the 150mph BTCC cars blasting around one of the most popular circuits on the calendar.

The event will also mark the important halfway stage of the BTCC season with rounds 13,14 and 15 of the championship determining the title picture for the second half of the year.

Furthermore Croft is celebrating its 50th anniversary in 2014 and with sporting euphoria in the area at an all time high, organisers are expecting a huge summer crowd to descend on the venue in what is sure to be a carnival atmosphere throughout the weekend.

Story so far: All change at the top
The BTCC is renowned for being one of the most exciting, competitive and unpredictable championships in the world and few could have foreseen the swing in the title chase that presented itself last time out at Oulton Park.

Reigning champion Andrew Jordan arrived at the picturesque Cheshire venue in confident mood and seemingly in imperious form, having won three of the opening nine races. The Pirtek Racing driver went on to suffer his worst event since 2011, however, with a race day high of eighth place providing scant reward for the 25-year-old.

Jordan dropped from first to third in the standings in just one afternoon as eBay Motors’ Colin Turkington soared to the championship summit thanks to a dominant double victory for the Portadown-based driver.

Honda Yuasa Racing’s Gordon Shedden maintained second in the table after securing an impressive points haul in the ‘estate style’ Civic Tourer — a new-for-2014 machine that ominously seems to be getting faster and faster.

Double champion Jason Plato remains in close contention after a podium at Oulton Park, whilst his old adversary Matt Neal endured a miserable weekend. Neal has been leap frogged in the standings by Turkington’s BMW team-mate Rob Collard who reached the rostrum twice in Cheshire.

Talking point: Croft celebrates its half century
At the beginning of the Second World War, an airfield named RAF Croft was built on the site now occupied by the circuit. Also known as Croft Aerodrome, it was mainly used as a bomber airfield and was home to a number of different aircraft types as well as several squadrons. Amongst them was Canada’s legendary 419 Squadron, a plaque to whom can be found on the office building today.

During the late 1940s and into the ‘50s, Darlington & District Motor Club organised race meetings on various layouts utilising the runways and perimeter roads, before Bruce Ropner and fellow enthusiasts purchased half the venue at public auction in 1962, completing a track on the site in July 1964.

The Daily Mirror Trophy Meeting revved the circuit into life on 3 August 1964, attracting a crowd of some 40,000 spectators to watch various classes of cars and motorcycles duelling it out wheel-to-wheel.

Since that historic day, Croft has played host to some of the sport’s most fabled competitors – think Formula One World Champions Ayrton Senna, James Hunt, Lewis Hamilton, Jenson Button and Alan Jones, national treasure Sir Stirling Moss and Indianapolis 500 winner Dario Franchitti, plus of course our own legendary BTCC champions.

“Croft is kind of like my second home track having grown up in Newcastle,” explained double champion Jason Plato. “The circuit has a fantastic blend of technical slow corners and some blindingly quick ones, which test the drivers to the max. I love the annual trip up north, the crowd there loves the BTCC and the BTCC loves Croft.”

Local heroes: MG duo spearheads local attack
The MG KX Clubcard Fuel Save driver pairing of Jason Plato and Sam Tordoff will spearhead the local challenge at Croft next weekend with the former having grown up on Tyneside and his younger team-mate coming from Leeds.

“It’s in a great part of the world,” enthused Yorkshireman Tordoff. “I’ve never seemed to have much luck at Croft, but I love going there. It’s my local track and I always enjoy a lot of support there from sponsors, family and friends. I’m really looking forward to the weekend, and hopefully I can enjoy a change of fortunes on home turf!”

Both Plato and Tordoff have a win apiece so far this season and have every chance of adding to their respective tallies during the event.

It’s not just the BTCC that boasts local connections, however, with some of the supporting cast also having links to Yorkshire. Amongst the local favourites taking to the track will be Emmerdale actor Kelvin Fletcher in the Porsche Carrera Cup GB whilst Leeds-based manufacturer Ginetta runs two supporting series in the line-up.

In addition to the BTCC, there will be a plethora of races on the support bill including the aforementioned Porsche Carrera Cup GB, Michelin Ginetta GT4 Supercup and Ginetta Junior Championship. The Dunlop MSA Formula Ford Championship of Great Britain – the series that launched the careers of a host of top drivers including Ayrton Senna and Jenson Button – represents single-seater racing, whilst the Renault UK Clio Cup will also feature on the huge bill of British racing.

Tickets can be purchased in advance until Monday 23rd June from as little as £11 by calling 01325 721815 or online at http://www.croftcircuit.co.uk/tickets/btcc.html. All admission includes access to Sunday’s autograph session with the BTCC drivers in the pit lane as well as free parking.