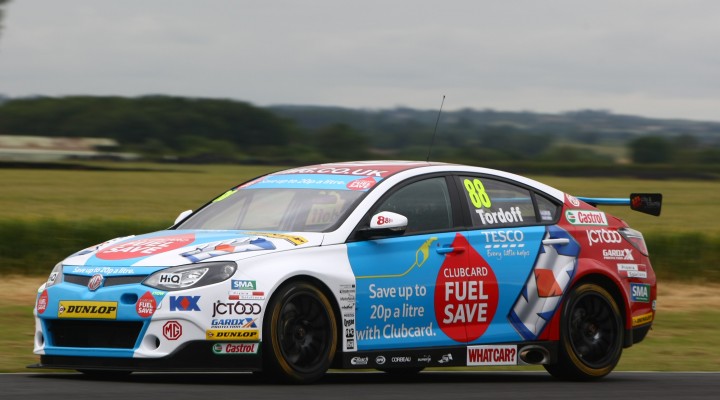 MG KX Clubcard Fuel Save’s Sam Tordoff was fastest in the second free practice session today at Croft. The local racer put in a time of 1:24.115s before a crash for Rob Austin at Clervaux brought the session to an early end due to barrier damage.

Reigning champion Andrew Jordan led most of the proceedings in his Pirtek Racing Civic, posting a very quick time early on and then going even quicker on the following tour. His time of 1:24.390s was under the lap record set by Colin Turkington in 2013, and the Ulsterman was unable to better Jordan’s time after having set the pace in FP1 earlier in the day.

Turkington had secured fourth fastest as the chequered flag came out, though his eBay Motors team-mates Rob Collard and Nick Foster found themselves further down the order in 13th and 17th respectively. Both were happy with their respective cars, however, despite needing to find more performance ahead of qualifying.

“It has been a bit of stop-start day so far,” said Collard. “I had a spin in the first session and was unable to really set a lap and we were just about to have another run at it then before the red flag came out. Colin (Turkington) seems to have found the right set-up and the car feels good so I’m optimistic for qualifying.”

Adam Morgan continued his strong showing around the 2.25-mile circuit to go third quickest behind Jordan. Despite being in its debut season, his WIX Racing Mercedes A Class posted a time of 1:24.763s – over half a second faster than the time he managed in different machinery last season.

Glynn Geddie impressed once more in the United Autosports Toyota Avensis. The Scotsman was fifth fastest, and his time would have secured seventh on the grid in 2013. It is undoubtedly the most competitive showing from the rookie driver so far this year, and all eyes will be on the #21 car to see how he gets on in qualifying this afternoon.

Ultimate pace remains largely unknown, however, as the session was cut short ten minutes from the end as a number of drivers were heading out for their qualifying simulations. Indeed, Rob Austin – who caused the red flag with an off at turn one – had been going improving throughout the session and was sixth fastest before his incident.

Jason Plato was another to suffer having spent most of the session looking into and refining the set-up of his car, although the MG driver will buoyed by the speed shown by his pace-setting team-mate Tordoff.

“It’s a pleasant surprise to be honest,” said Tordoff. “I couldn’t quite believe we were able to go that quick and the car has felt good straight out of the box today. It hasn’t always gone well for me here but that’s a great start to the weekend. I still think Turkington will be the man to beat in qualifying but we might just be the best of the rest so we’ll see how it goes.”