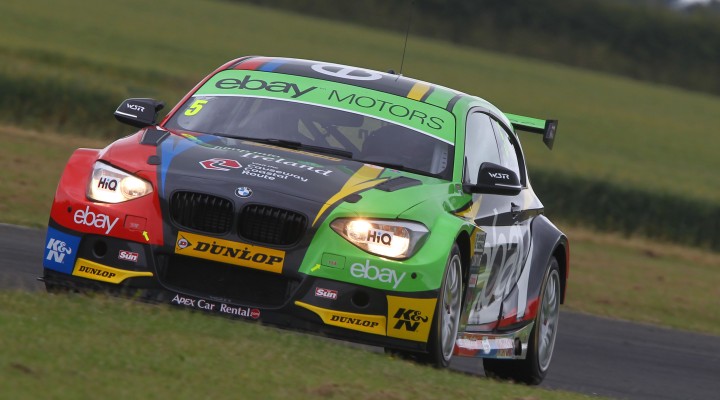 Championship leader Colin Turkington has continued his recent fine form by topping the times in the opening free practice session at Croft.

Turkington’s double success last time out at Oulton Park sent the Ulsterman soaring to the summit of the BTCC standings and it seems there’s little sign of the 2009 champion letting up. Despite carrying the maximum success ballast Turkington was able to set a lap time just a fraction slower than his pole position time here last season, and his eBay Motors BMW seemingly still had performance gains in reserve.

Light drizzle fell during the 40 minute session although the lap times suggest it had little effect on the grip in the early running. It proved to be a factor as the session progressed, however, with very few cars improving on their performance after a mid-session stoppage to remove the stricken Chevrolet Cruze of Aiden Moffat, which had stopped on track with a mechanical problem.

“It’s always nice to start the weekend fast,” said Colin. “It’s one of those sessions that you can’t read too much into – there were spots of rain on the windscreen right from the start and it was a case of putting in a quick one early on. That said my car was working well – we had a similar balance to what we had at Oulton last time out which is what we were aiming for, and compared to Croft last year the car has come on a long way and the pace is really good. I didn’t quite expect to be in the 1:24s quite so soon, but they’ll all be up there with me soon enough!”

Reigning champion Andrew Jordan is keen to bounce back after a challenging weekend at Oulton Park earlier this month and second place in the FP1 time sheets will have boosted his confidence ahead of a vital weekend for the 25-year-old.

Such was Turkington’s early dominance that he was over a second clear of third place, but WIX Racing’s Adam Morgan will still be delighted with his showing having rarely troubled the top order in recent events.

“It’s encouraging to come away from practice near the front – it’s a good boost for the team,” beamed Morgan. “Everyone is on different strategies of course, but the car felt really good so I’m happy. I think my sector three was the same pace I was for qualifying last year so that’s a really good sign. We’ll keep it going, keep pushing and hope it stays dry! I like Croft, I had a bit of a nightmare last year but it’s a fast, brave circuit and I’m looking forward to the rest of the weekend.”

BMW and MG proved to be the class of the field at the Yorkshire circuit last season and both marques are showing similar speed this time around. Nick Foster backed-up the pace produced by his eBay Motors team-mate Turkington by setting the fourth fastest time ahead of the MG KX Clubcard Fuel Save duo of Jason Plato and Sam Tordoff.

Glynn Geddie enjoyed one of the best sessions of his short BTCC career so far by hauling his United Autosports Toyota Avensis into seventh, ahead of the similar Speedworks machine of Tom Ingram.

Multiple champions Matt Neal and Alain Menu rounded out the top ten, whilst Pirtek Racing’s Martin Depper had a promising run to 11th.

Click here for a full classification of Free Practice 1