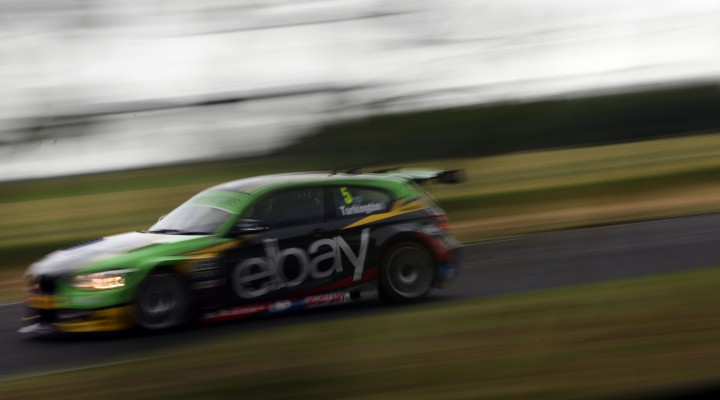 eBay Motors’ Colin Turkington was already the most successful BTCC driver ever around Croft coming into the weekend and he’s further enhanced his record with a lights-to-flag victory in the opening race at the Yorkshire venue.

The confident 32-year-old produced a particularly routine win as he made a clean getaway from pole position before gradually pulling away from the chasing pack throughout the race.

Turkington took his seventh and eighth victories at the circuit in 2013 and is also enjoying a rich vein of form in recent events. A double win last time out at Oulton Park sent Turkington soaring the championship summit and he simply picked up from where he left off by taking another commanding victory here. This fact that both the driver and his BMW 125i M Sport seem perfectly suited to the 2.5 mile Croft circuit suggested his rivals would have their work cut out to challenge, and so it proved as Turkington scampered away to win by more than seven seconds after 14 laps of racing.

“It’s always harder when there’s an expectation for you to win, and while people might say it looks easy out there I can honestly say that no BTCC race is easy to win,” said Turkington. “My biggest drama was at the start – there’s always a question mark when you have a new component to use, but once I made it around the first corner OK the BMW came on song. So far it’s been a mirror image of my 2009 season – strong weekends at Oulton and Croft really set me up for the second half of the year, but you can’t take anything for granted on this grid. ”

Gordon Shedden scored a lonely second position after getting the jump on Jason Plato on the run down to Clervaux for the first time, but the battle for the final place on the podium was anything but sedate.

Plato initially seemed to get a good start in his MG6 but got bogged down in the run up through the gears, giving Shedden’s Civic Tourer the chance to nip by. It was fraught behind on the exit of Clervaux as Matt Neal got sideways and was touched by the Honda of Andrew Jordan.

As the gaggle of cars behind baulked up to avoid Neal there was a chain of events that ultimately led to contact between Nick Foster’s BMW, Adam Morgan’s Mercedes and Rob Austin’s Audi A4. The first two retired with damage, whilst Austin continued at the rear of the field before enduring further incidents later in the race.

The fallout from the lap one incident meant Rob Collard’s BMW was now attached to the rear bumper of Plato’s MG, whilst Jordan squabbled with the sister MG behind. Collard was perfectly poised for the entire contest but Plato produced a defensive masterclass to hold on to a podium position by just 0.263s.

“Jason was a wily old fox in that one,” Collard told ITV whilst the wily man himself commented, “Rob was quite a bit quicker than me. I had to work out where I was most at risk and needed to defend – which turned out to be most of the lap! It was a good race but we are struggling a bit. This track works the front tyres very hard and we were feeling it towards the end. It was good fun though, we’ll see how we get on in the next one.”

Neal fought his way back up to sixth after despatching Tordoff’s MG, who in turn dropped further down the order when the hard-charging Alain Menu surged past later in the race, and Airwaves Racing’s Mat Jackson immediately followed him. It had been a hard day for the ‘Blue Ovals’ on Saturday but Jackson’s rise to eighth and the AmD Focus of Dave Newsham taking 11th will have provided some promise for the marque.

Hunter Abbott scored his maiden top ten finish in the BTCC, whilst Martin Depper took his first points of the season after a last gasp pass by Tom Ingram’s Toyota for 14th – the Pirtek Racing Civic eventually crossing the line just 0.041s ahead of the Speedworks Avensis.

There were myriad of incidents further down the field with a number of cars finishing the race with damaged bodywork. Austin and Warren Scott’s VW touched at the final hairpin, forcing the Crabbie’s Focus of Jack Clarke to take evasive action. Clarke then had his own moment with Jack Goff’s Vauxhall Insignia, whilst Glynn Geddie’s Toyota was forced to pit by stewards with potentially dangerous bodywork flailing from his bonnet.

Click here for the full classification of race one at Croft