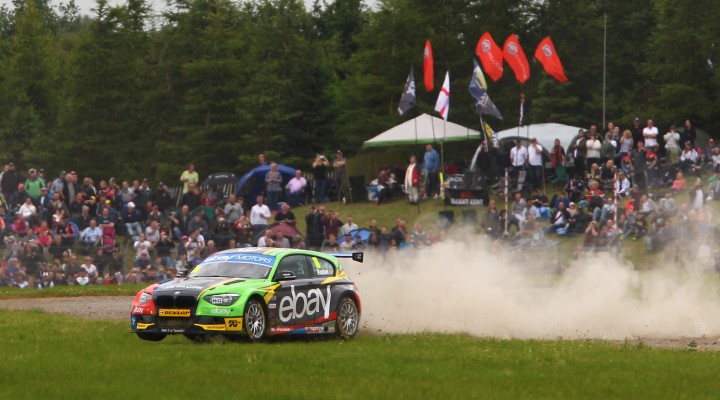 Nick Foster closed the gap to Alain Menu in the Jack Sears trophy over the Croft weekend (28-29 June) and now sits second in the standings. While his eBay Motors team-mate Colin Turkington was grabbing the headlines at the front of the field, Foster, who scored his only BTCC podium to date at Croft in 2011, made up an impressive 22 spots from his starting positions.

Qualifying his 1 Series BMW just outside the top ten, Foster had a disastrous opening encounter that saw him spearing over the infield into retirement on the first lap after contact damaged his car. This demoted the Hampshire-based racer to the back of the grid for race two, and he duly made up a superb 17 places to finish 13th and in a points-scoring position. Further progress in the final showdown gave Foster a great top ten finish to round out a day that had started with a dramatic DNF, but ended up bringing some strong points and a great result for the Jack Sears Trophy.

While Foster’s improvement tally of 22 positions was remarkable, it was in fact Adam Morgan who once again made up the most of any driver having done the identical thing last time out at Oulton Park. The WIX Racing Mercedes was involved in the same incident as Foster on lap one, and the resulting damage also put Morgan out of the race. Much like Foster, two impressive drives through the battling pack meant he’d moved 23 positions from his starting grid slots, ending the weekend on a high with a top-five finish at the end of the day.

Alain Menu still leads the standings for Chrome Edition Restart Racing. The Swiss ace made an impressive showing at Croft with his results certainly not reflecting his outright pace. In race two he found himself fighting in the top six before a tap from old adversary Jason Plato sent him off at Clervaux corner and out of contention. A row 12 start in race three gave the VW CC driver the chance to make up places, and he came through to finish ninth handing him a total of 18 positions on the day.

Two other drivers making progress in the JST at Croft were Alcosense Breathalysers’ Hunter Abbott and Laser Tools racer Aiden Moffat. Abbott seized the initiative to race on the soft tyre in the opening encounter, using the faster pace of his Dunlops to take a seasons’ best result of 10th having started 17th. A non-finish in the second bout meant more places could be made up at the third time of asking, and again Abbott maximised his opportunity to move forward 22 places in the two races completed.

Moffat almost doubled his JST tally in a single race meeting, progressing 15 places from his starting slots in the north east. With six places made up in race one and nine in race two, the Chevrolet Cruze driver is undoubtedly getting to grips with the rough-and-tumble of the BTCC in this, his rookie season.