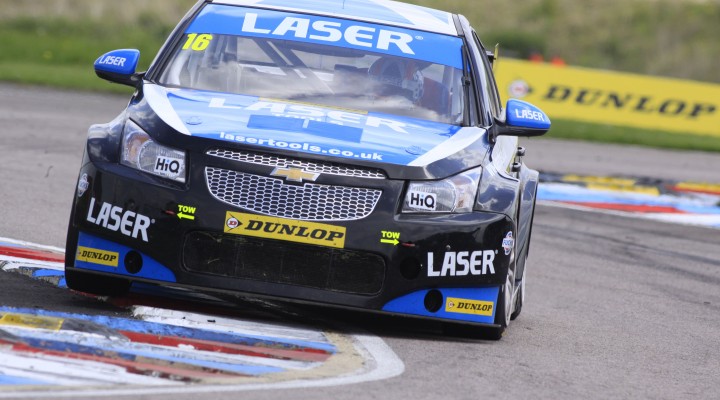 Laser Tools Racing will work in co-operation with Ciceley Motorsport for the second half of the 2014 Dunlop MSA British Touring Car Championship after a recent agreement was reached between the two teams. In conjunction with the partnership Tom Onslow-Cole has also been welcomed to Laser Tools Racing as its Performance Advisor.

Ciceley Motorsport Chief Engineer Paul Ridgeway and his staff were lauded for the preparation of WIX Racing’s Mercedes A-Class for the start of the 2014 season and it is hoped that his experience will help to push the Laser Tools squad further up the order.

After running in selected events last season driver Aiden Moffat is contesting his first full BTCC campaign in 2014 with the 17-year-old Scot originally opting to race a Chevrolet Cruze run by his own family team.

Despite showing flashes of speed, including a near points finish at Donington Park in April, the team admits that overall progress has been challenging. Some mechanical problems have halted development of the car and limited-testing opportunities has seen the squad gain much of its education during race weekends.

Team boss Bob Moffat has been assessing the situation for a number of months and feels the time is right to position his outfit in partnership with an experienced squad, whilst the addition of Onslow-Cole is set to directly benefit Aiden in his own development as a BTCC driver.

“We spoke to a few interested teams,” said Bob. “We have carefully assessed our progress and everyone in the team did a fantastic job to get the car on the grid for the start of the season. It has of course been a steep learning curve and we felt the summer break was the right time for our next move.

“The opportunity to work with an experienced operation like Ciceley Motorsport is a great step for us and we hope to benefit from their preparation qualities and in overseeing of the car during a race weekend.

“The other real benefit is for Aiden himself to be involved with such a team and a top driver in Adam Morgan. Furthermore we believe that Aiden working directly with Onlsow-Cole will bring immediate benefits. Tom is so experienced as a BTCC driver, having driven and won in a number of different machines. He’s also been in the position where Aiden is now – starting out in the BTCC ­– so he’ll be a huge help I’m sure, plus we will share data with the Ciceley team which can only help him at this early stage of his BTCC career.

“We’re delighted to be working with such really nice people who we know will do a great job.”

Laser Tools Racing will continue to have its own staff on a race weekend, with its lead engineer working closely with Ridgeway at Ciceley Motorsport. Onslow-Cole will also liaise with Ridgeway and advise the team in preparation and review of each weekend. The multiple BTCC race winner will also work with Aiden at events when his own racing commitments allow.

“I am really pleased to be helping Aiden and the team, as well as returning to see lots of familiar faces in the BTCC paddock,” enthused Onslow-Cole. “I believe I have lots of experience to give, both on the driving front but also having worked with a number of BTCC cars including the latest NGTC machines. I have worked with Paul Ridgeway before and I also coached Aiden during his Fiesta days so there’s already a relationship there and I can’t wait to get started.”

The partnership is already underway with the first race weekend of the tie-up commencing on 2/3 August at Snetterton.