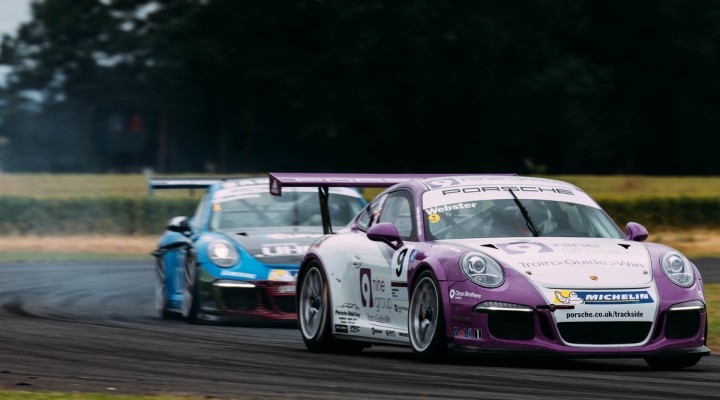 In addition to the BTCC, there’s always a plethora of races on the TOCA support bill. The Dunlop MSA Formula Ford Championship of Great Britain – the series that launched the careers of a host of top drivers including Ayrton Senna and Jenson Button – represents single-seater racing. Sportscar racing fans get their fix with action from the Michelin Ginetta GT4 Supercup, Porsche Carrera Cup GB and Ginetta Junior Championship, whilst the Renault UK Clio Cup, often seen as a stepping-stone to reaching the BTCC, also features. Over the next few days here at btcc.net we’ll be taking a look at their respective seasons so far – today it’s the turn of Carrera Cup GB…

However, double champion Michael Meadows (Samsung UHD TV Racing) knows he must claw back Webster’s 10-point lead and get his bid for a record third title firmly back on track after being forced to miss one of the races at Croft last time out after an off in qualifying. Chasing Webster and Meadows are Paul Rees (In2 Racing) and Victor Jimenez (Redline Racing).

The first half of the 2014 season was topped by a sensational race at Le Mans alongside the Carrera Cup France during the build up to the start of the famous 24-hour race. Ben Barker (Parr Motorsport) made a one-off return to the Carrera Cup GB for the race and emerged to take a fabulous overall victory from a field of more than 60 cars.