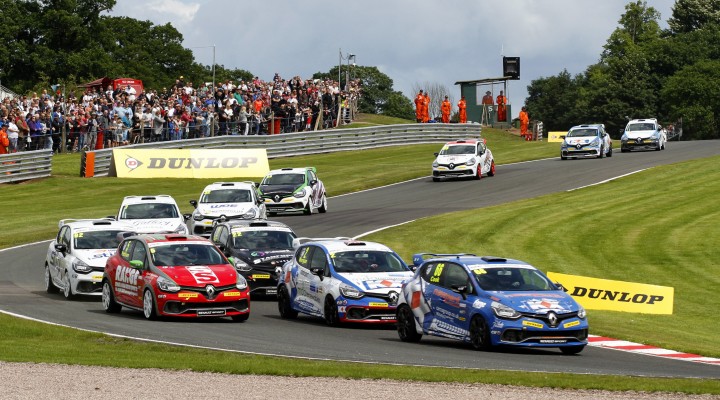 In addition to the BTCC, there’s always a plethora of races on the TOCA support bill. The Dunlop MSA Formula Ford Championship of Great Britain – the series that launched the careers of a host of top drivers including Ayrton Senna and Jenson Button – represents single-seater racing. Sportscar racing fans get their fix with action from the Michelin Ginetta GT4 Supercup, Porsche Carrera Cup GB and Ginetta Junior Championship, whilst the Renault UK Clio Cup, often seen as a stepping-stone to reaching the BTCC, also features. Over the next few days here at btcc.net we’ll be taking a look at their respective seasons so far – today it’s the turn of the Renault UK Clio Cup…

Ten races down, eight to go in the Courier Connections Renault UK Clio Cup in a season which has so far delivered five different winners, 10 podium finishers and some of the best door handle-to-door handle action on the BTCC package.

Neatly linking in with the 40th anniversary season of Renault motorsport in Britain, the marque’s flagship category features the latest fourth generation car this year – a turbo powered thoroughbred 1.6-litre racer based on the Clio Renaultsport 200 Turbo EDC roadcar.

Josh Cook, the dominant force for much of the first half of the season, leads the driver standings ahead of the championship’s resumption at Snetterton but his advantage was slashed last time out at Croft when contact in round 10 resulted in his first non-finish of 2014.

Going into the fifth event of the season with a 32-point cushion, having accrued three race victories and four other podiums up to that point, the SV Racing with KX driver’s lead was almost halved to just 15 points.

The star of Croft was undoubtedly Jordan Stilp, the second year Clio racer sealing a perfect weekend with a double pole position, two sensational wins – his first in the category – and fastest lap in each encounter. The 20Ten Racing driver leapt from seventh in the standings into the coveted top three.

Second in the championship is category stalwart James Colburn, the Westbourne Motorsport racer having claimed wins at Thruxton and Oulton Park. Since his first victory of the year, Colburn – who is still only 21-years-old despite being in his sixth season in Clios – has been on top form.

VitalRacing with Team Pyro’s Mike Bushell heads to Snetterton just four points adrift of third place, even though the first half of his campaign has been dogged by misfortune. Taking podiums at Brands Hatch and Donington, before claiming his first ever victory in round five at Thruxton, Bushell has been the victim of contact more than once and is determined to get his year back on track.