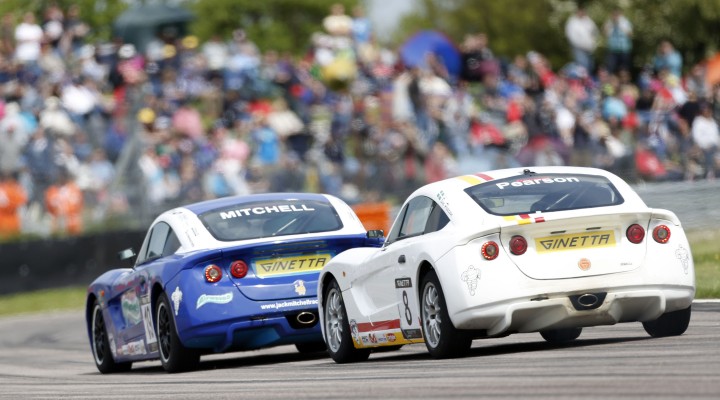 In addition to the BTCC, there’s always a plethora of races on the TOCA support bill. The Dunlop MSA Formula Ford Championship of Great Britain – the series that launched the careers of a host of top drivers including Ayrton Senna and Jenson Button – represents single-seater racing. Sportscar racing fans get their fix with action from the Michelin Ginetta GT4 Supercup, Porsche Carrera Cup GB and Ginetta Junior Championship, whilst the Renault UK Clio Cup, often seen as a stepping-stone to reaching the BTCC, also features. Over the next few days here at btcc.net we’ll be taking a look at their respective seasons so far – today it’s the turn of the Ginetta Junior Championship…

Jack Mitchell has been the man to beat in the opening half of the 2014 Ginetta Junior Championship, with six wins and a further two podiums over the opening 10 rounds, affording him a 93 point lead as we begin the latter half of the season.

With 11 podiums between them, including a race win apiece, rookie racers Dan Zelos, Lando Norris and Jamie Caroline are giving their peers a real run for their money as they attempt to chase down team-mates Ryan Hadfield and Ben Pearson ahead.

Jack Rawles and Jonathan Hadfield round out the top ten, whilst Ginetta Junior newcomers continue to impress with close racing in their maiden season; William Taylforth leads the best of the rest as he chases his first top five finish, switching to TCR for the second half of the season where he will join top ten finisher Matt Chapman.

Flashman Finneran from Newmarket is aiming for strong results in front of friends and family in his home race at Snetterton. The young racer, who suffers from Autism, has already made a lasting impression on the series in his privately run G40.

Current Ginetta Junior Scholar Alex Sedgwick landed his first top five finish and a rookie cup win at Oulton Park, whilst Senna Proctor enjoyed equal success at Croft last time out and Billy Monger continues in his effort to improve on his best finish of ninth.

Lewis Brown tops the remainder of the entrants, whilst Tom Parker equals Brown’s highest race result of 11th and  Hillspeed’s Horsham racer Harry Mailer is still aiming to work his way up the championship tables.

With the stage set for a very exciting second half of the season, expect more incredibly close racing from the Ginetta Junior drivers, and don’t forget to enter the Ginetta Junior Scholarship to win a fully funded place on the 2015 grid.