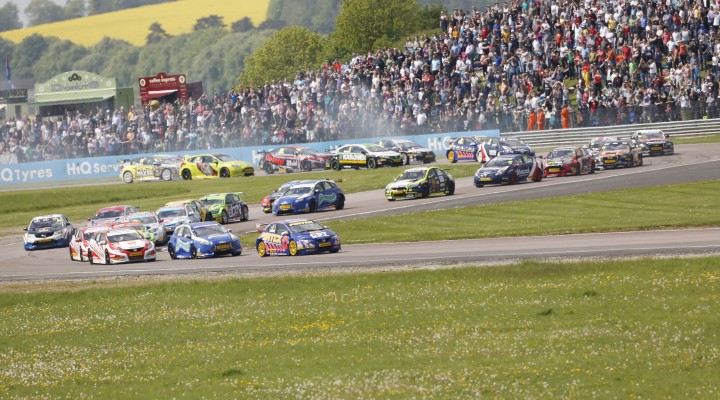 The Dunlop MSA British Touring Car Championship soars into speedy Snetterton next weekend (2/3 August) as the second half of its season kicks off in the height of summer.

The series is currently in the midst of its mid-season break, but Norfolk will soon be treated to a spell binding sight of 31 ultra-quick touring cars piloted by some of the world’s best tin top drivers for rounds 16, 17 and 18 of the 30-race championship.

With a mixture of flat out straights and tight, technical infield sections, the Snetterton 300 circuit provides spectators with a superb sight of the action from the venue’s panoramic viewing areas and grandstands, plus there will be giant TV screens showing every unmissable moment. Snetterton has long been one of the most popular events on the calendar for drivers and fans alike, with a huge crowd expected to see what is sure to be another dramatic BTCC weekend.

“It’s a real racer’s track,” says reigning champion Andrew Jordan. “We know how good the action is at Snetterton – there’s lots of tight hairpins and big braking areas so it’s great for overtaking and it’s going to be as exciting as ever.

“The atmosphere there is awesome too – it follows the summer break so everyone is always raring to go, including the fans! Lots of people camp and come to watch, plus the sun is normally out, so it just makes for a great weekend all round.”

A double victory at Oulton Park for Colin Turkington in June sent the Ulsterman to the summit of the standings for the first time since he won the title back in 2009. He cemented his place with pole position and two further victories last time out at Croft, confirming a real shift in the tide of the title chase towards the eBay Motors driver.

Reigning champion Andrew Jordan had kicked off his championship defence in fine style with two wins at the Brands Hatch curtain-raiser before another triumph followed at the fastest track in the UK, Thruxton. Seemingly in charge of proceedings the Pirtek Racing driver then endured a disappointing event at Oulton – collecting his lowest weekend points haul for two years. Jordan continued to struggle for outright pace at Croft, but such is his talent and that of his championship winning team that the 25-year-old secured a reverse grid victory to reignite his challenge.

“It was such a relief,” said Jordan. “We really really needed it and it’s thanks to all the hard work by the team.”

Turkington’s closest rival at present is the consistently quick Gordon Shedden. The Scotsman won his maiden BTCC title in 2012 and came within seven points of retaining the crown last season. With the Honda Yuasa Racing squad launching an all-new Civic Tourer for the 2014 campaign Shedden now finds himself just seven points from top spot once again, but this time he has half a season remaining to make up the deficit. His two victories so far this season included a stunning performance at Donington Park – the first win for an ‘estate’ style car in the BTCC.

It’s far from a three horse race, however, with two-time champion Jason Plato and Turkington’s team-mate Rob Collard separated by just nine points behind the leading trio. What is for certain though is that if any of the chasing pack hold genuine intentions of winning the title then they’ll need to make their move sooner rather than later.

MG enjoyed a near half-second advantage over its rivals during qualifying at Snetterton last season, which they duly converted into a comfortable one-two finish in the opening race. Much like the bulk of its season, however, both Jason Plato and Sam Tordoff encountered difficulties in the following races and the team was unable to score the points that its pace ultimately deserved.

If Plato and Tordoff want to get their respective title tilts back on track this time around, however, then MG KX Clubcard Fuel Save will need to hope it again holds the edge over the rest of the field around the 2.99 miles of tarmac.

Tordoff claimed his first ever BTCC win at the circuit last year and also holds the lap record, whilst Plato has won more races at the Norfolk venue than any other driver in the history of the series. Incredibly the BTCC stalwart has enjoyed 11 victories – six clear of his nearest challenger!

So if history and statistics are anything to go by ahead then we can expect to see the British marque at the forefront of the action next weekend.

In addition to the BTCC, there will be a plethora of races on the support bill, which will also see some of the region’s top racing drivers competing. The main sportscar contests will see Stowmarket’s Josh Webster looking to maintain his Porsche Carrera Cup GB lead, whilst King’s Lynn racer Carl Breeze is hoping to continue his championship challenge in the Ginetta GT4 Supercup.

There will also be races from the Dunlop MSA Formula Ford Championship of Great Britain, Renault UK Clio Cup and Ginetta Junior Championship.

Tickets for the Dunlop MSA British Touring Car Championship at Snetterton are available from £26, with free entry for children aged 12 and under. For more information call 0843 453 9000 or visit www.snetterton.co.uk. All admission includes access to Sunday’s autograph session with the BTCC drivers in the pit lane as well as free parking.