New partnership takes to the track 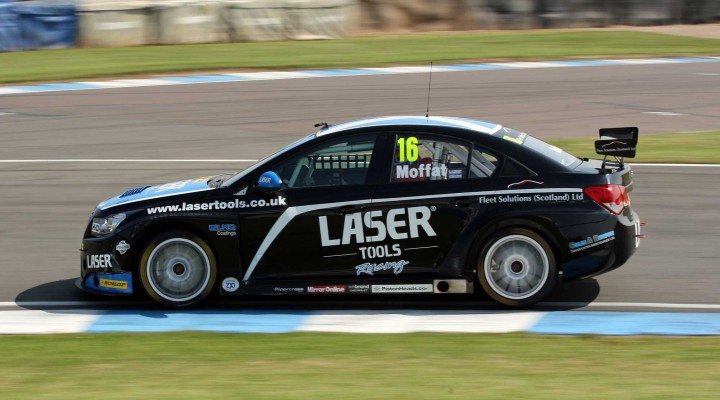 Donington Park recently saw the new partnership of Laser Tools Racing and Ciceley Motorsport take to the track for the first time, as Aiden Moffat tested his Chevrolet Cruze in a bid to address some early season reliability and performance issues.

It was a return to action for Aiden as the Scottish youngster looks for a turnaround in fortunes in his first full Dunlop MSA British Touring Car Championship season.

The biggest change made by the squad during the summer break is likely to be the input of Ciceley’s Head of Engineering, Paul Ridgeway, who is overseeing development of the car.

“This is very much business as usual for us,” Paul said. “We have a lot of BTCC and NGTC data and we have already identified some areas where we believe we can add real improvements to Aiden’s car.”

Aiden himself could not have been more positive following his maiden run under new guidance. “It is like a different car to drive,” he said. “Whereas before it felt like I had to point and shoot it around the corners due to a lack of traction, the whole car feels much more planted and secure. It is amazing to feel the difference and time will bring greater rewards.”

Russell Morgan, boss of Ciceley Motorsport, said: “We think we can add value to Aiden and the team, and based on our early experiences we are really looking forward to a long-term relationship with them.”

So it seems the initial results were very positive for the re-jigged Laser Tools Racing line-up, but the proof will ultimately be determined when Aiden and the other 30 BTCC cars race in anger, commencing with rounds 16, 17 and 18 at Snetterton this weekend.