JAKE HILL TO GET A TEST RUN WITH AMD 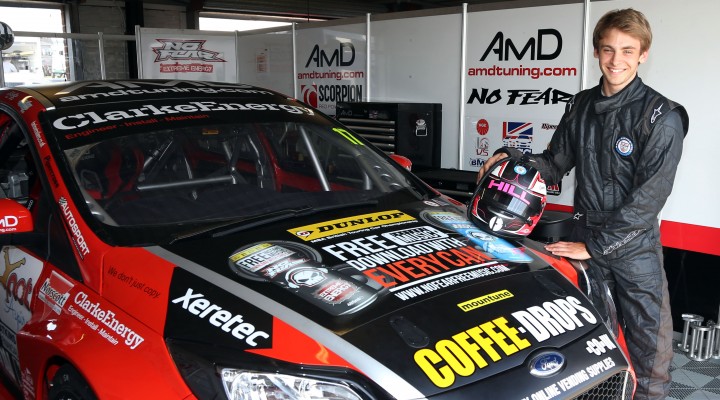 20-year-old BRDC Rising Star Jake Hill will return to the driving seat in a BTCC car for the first time in 2014 at Dunlop’s official test at Snetterton next Tuesday (5 August), when he’ll sample Dave Newsham’s AmDTuning.com Ford Focus.

Hill made a winning debut in the Jack Series Trophy at Croft last year in the Motorbase Performance-prepared Ford Focus ST, then impressed at Brands Hatch in the series finale racing in the Exocet Racing Audi A4, and is working hard on a full-time return to the series.

“Shaun gave me my first ever run in a BTCC car back in 2011 when I shook down the S2000 Golf for him, and also supported me in my Ginetta GT Supercup campaign, so it’s great that he has again gone out of his way to give me a run in the car. Dave (Newsham) will drive most of the day – so a big thanks to him too for giving up some of the day for me – but I will get a decent run on Tuesday afternoon, so it’s great to sample the car and remind everyone that I am here and as determined as ever to be part of the series,” smiled Jake.

Hill has also been coaching 16-year-old Esmee Hawkey in her Ginetta Junior test programme that is overseen by AmD, and has been delighted with the pace shown by the Kent-based lady racer.

“Esmee is getting quicker and more consistent every time we run. She is testing to prepare fully for her 2015 campaign, and it’s nice to be able to share my experience from Ginetta Juniors with her.”

Meanwhile AmD team boss Shaun Hollamby feels that Hill would be a worthy addition to the BTCC on a consistent basis.

“Jake has impressed me from the outset. He’s still won more Ginetta Junior races than anyone and has won in pretty much every series he’s been in. It’s good to give young drivers a break, which is what we did in 2011 and what we are doing with Esmee. There’s no doubt in my mind that Jake is one of the most promising young drivers in the country, as so often is the way it’s all about budget, but I have no doubt if he’s out there regularly he will doubtlessly succeed.”

After making an impressive debut in the Porsche Carrera Cup GB at the opening BTCC meeting of 2014 at Brands Hatch where he took a double podium on his debut in the series, and taking four wins out of four races in the Atom Cup this season, BTCC is clearly now Hill’s ‘Focus’ going forwards…