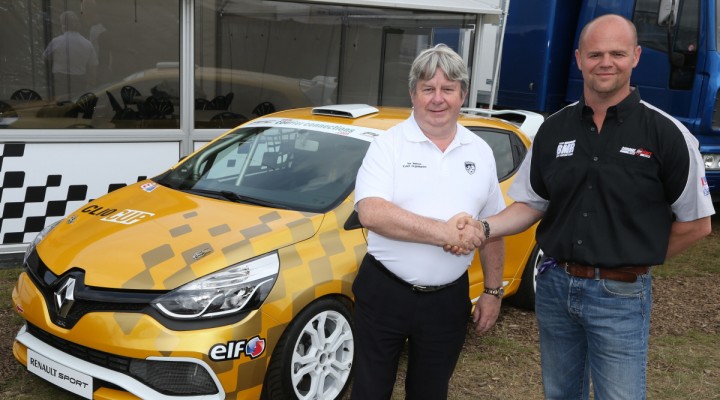 Recognising Renault UK’s long-standing BTCC feeder series as a prime proving ground for the touring car drivers of the future, Team BMR principal Warren Scott – himself a competitor in the BTCC – has today confirmed his Hertfordshire-based squad is purchasing four of the latest turbo-powered Clios.

Making the announcement at Snetterton in Norfolk, venue for the latest rounds of both the BTCC and Courier Connections Renault UK Clio Cup this weekend, 2nd/3rd August, Scott is delighted to be expanding his team’s operations into the ultra-competitive one-make category.

“We’ve already got a couple of drivers interested for next year’s Clio Cup and the plan is to run four cars in the championship next season, as a feeder for our BTCC team”, commented Scott, “This move will be good for us and obviously good for the Clio Cup too. It’s something I’ve been thinking about since the first couple of rounds of the season this year actually.”

Team BMR first arrived in the BTCC, the UK’s biggest and most popular motor racing championship, last year when former British Superbike racer Scott opted to make the switch to four wheels with his own squad.

With such a wealth of experience on tap in the ranks of his BTCC squad, Scott aims to utilise the skills and knowledge of his touring car drivers to help provide a vital edge for competitors who sign-up to Team BMR’s new Clio Cup team next year.

“I’m in this for the long run and want to make Team BMR a real success in the BTCC, the Clio Cup is the place to train the young drivers and bring them through”, he added, “It’s a real breeding ground for touring cars, as we’ve seen with Jack [Goff] and Aron [Smith], and gives drivers the skills they need.

“Racing isn’t just about driving the car, there’s so much more to it. Our current BTCC drivers have got a lot of experience to share, so it’ll be a brilliant opportunity for the drivers we run in Clios next year to benefit from that as part of Team BMR.”

Renaultsport’s fourth generation Clio Cup race car, based on the latest road-going Clio Renaultsport 200 Turbo EDC, is midway through its first season in the Renault UK Clio Cup – the 40th anniversary year of Renault racing in Britain – after debuting in the Eurocup Clio series in 2013.

Having more than lived up to its famous predecessor with superb door handle-to-door handle action a feature at each of the five events so far contested in 2014, increased grids are expected next year and the Team BMR announcement has well and truly boosted the category’s momentum.

Ian Watson of the British Automobile Racing Club (BARC), the organising body behind the Courier Connections Renault UK Clio Cup, warmly welcomes the Team BMR announcement and is thrilled to see another new squad joining the ranks of the popular one-make series.

“I am obviously delighted that any BTCC team is going to run within the Clio Cup, but particularly pleased to see Warren’s team joining the grid in 2015 as its standing and results within the BTCC continue to grow”, said Watson, “It’s nice to know Warren feels the Clio Cup is a training ground for BTCC drivers of the future and I am sure his drivers will receive excellent help and assistance.

“They will undoubtedly benefit from the experience of the Team BMR BTCC drivers, while also benefitting from the high standard of preparation of such a well organised operation. I believe the faith shown in the Clio Cup by Warren is an indication of the increased number of entries expected for the 2015 season.”