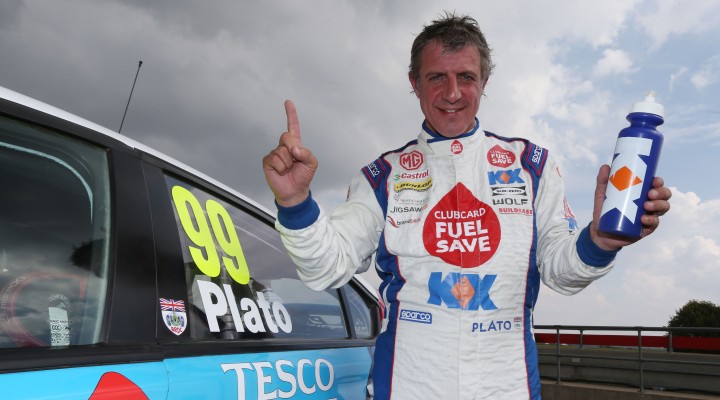 MG KX Clubcard Fuel Save driver Jason Plato has claimed his second BTCC victory of the season after leading the opening race at Snetterton from start-to-finish.

Championship leader Colin Turkington extended his advantage in the standings by taking second ahead of Honda Yuasa Racing’s Matt Neal. Adam Morgan was just over a second away from scoring a maiden podium for the new-for-2014 WIX Racing Mercedes A Class as he closely followed home Neal’s Honda Civic Tourer.

Sam Tordoff’s race day commenced in a rather dramatic and unwanted fashion as the second-row starter suffered with brake failure going into Riches on the opening lap. Contact followed behind as his MG6 slowly rejoined the track, which played its part in a further clash with Dave Newsham’s Ford Focus and the eBay Motors BMW of Nick Foster.

There was one more significant incident before the end of the opening tour when Jack Goff’s VW tagged the MG of Marc Hynes in a battle at the lower end of the top ten. Hynes’ race wouldn’t get any less frenetic as late contact with the Proton of Daniel Welch put paid to the former’s recovery drive through the order, whilst STP Racing’s Welch retired in the pitlane.

Plato and Turkington pulled away at the head of the field as Alain Menu slotted his VW into third during the early running. Meanwhile Neal was busy making his way by the fast-starting Tom Ingram before making relative light work of Menu ahead of him. The three-time champion made his own getaway as a quite bizarre fight for fourth followed him.

Aron Smith, Adam Morgan and Gordon Shedden had shuffled Ingram down the order in lightning quick succession and the trio immediately set about attacking Menu ahead. Smith went side-by-side with his Team BMR Restart team-mate and the pair touched across the start/finish line before an opportunistic Morgan eventually squeezed by both of them in the same move at Montreal. Morgan’s Mercedes closed down Neal for the remainder of the contest but eventually ran out of time to make a move.

Menu hung on to fifth until the finish while Smith in turn fended off attacks from Shedden. Airwaves Racing’s Mat Jackson took ninth ahead of a hard-charging Rob Collard, who ripped through the order from the moment the lights went out.

Collard wasn’t alone in producing a recovery drive as former champions Fabrizio Giovanardi and Andrew Jordan showcased their own credentials in a similar fashion. Giovanardi – starting at the back following his third penalty of the season – cleanly made his way through to 13th whilst Jordan narrowly missed out on the points in 16th. The reigning champion started from the pitlane after getting clearance to race by the BTCC medical team earlier this morning following his high-speed accident during practice yesterday.

Ingram eventually missed out on a well-deserved top ten finish as his Toyota Avensis lost its front-left wheel at high-speed on the final lap, resulting in his Speedworks Motorsport machine being speared off into the barrier.

Jason Plato said: “If I made the start, I knew there was a chance.  I made a great start and leading into turn one was psychologically the key for the race. We are in a great place with the car and we are confident ahead of race two but we have weight on. It will take some pace off the car but how much we will have to wait and see. I am behind in the points after the first half of the year but now the car is good here and it’s time to claw points back in the championship.”

Colin Turkington said: “It was a good race and a good start to the day. We did all the hard work yesterday to get up on the front row. I got a good start but the run into turn one is not that long and Jason did enough to be in front. I pushed all race but Jason was just quicker and I am sure he had more pace up his sleeve. The BMW is strong at carrying the weight and we lose 9kg for the next one.”

Matt Neal said: “It was a busy start as I had to contend with Menu and Ingram – it was a busy old race. I tried to back everything up to help Gordon [Shedden] as well as look in the mirrors for Adam Morgan. I had a fantastic car but I was light so we will have to see how we go with more weight on for race two. The podium and third was a good result.”