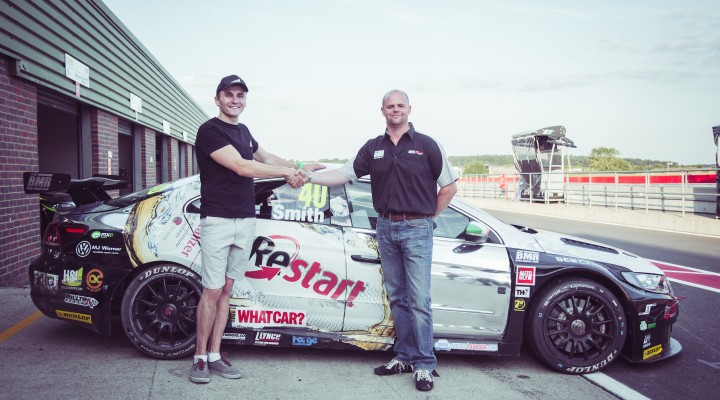 Three-time race-winner Aron Smith will remain with Team BMR for the 2015 Dunlop MSA British Touring Car Championship after penning a deal to race with the fledgling squad for at least another season.

Smith has enjoyed a stellar campaign so far with the new-for-2014 team, scoring victories at both Oulton Park and Snetterton. So impressed by the progress being made by the team is Smith, that he was extremely keen to tie down his future with the outfit.

“I couldn’t be happier with the news; I feel completely at home at Team BMR,” he said. “This has all come about very early but it has put us in a great position for next season; everything we achieve before the end of this year is an added bonus. I truly believe that this is only the beginning of our journey together and to say I’m excited to see what we can achieve is an understatement.”

Smith joined Team BMR early in 2014 alongside former double champion Alain Menu, fellow young gun Jack Goff and team owner Warren Scott. Smith earned the team its maiden victory in only the fourth weekend of the season and the squad has since expanded to running four Volkswagen Passat CCs for the remainder of the year. The Dubliner’s deal will see Smith remain at the wheel of his VW until the end of 2015.

Team boss Scott is delighted with the form and progress shown by his entire operation, believing that Team BMR has championship-winning potential in the future.

“The season so far has been way above our expectations and I am extremely pleased,” said Scott. “I’m also delighted to have signed up Aron for next season as we want to continue to build on the continuity and momentum we’ve gained so far.

“Everyone has done a fantastic job, particularly the team behind the scenes. Aron sees the progress we’ve made and we see the development and potential in him – now our expectations have been raised a little and we want to go further together.

“Aron has been consistently fast this season and has also shown his mettle under extreme pressure, like with his win at Snetterton, and I have been very impressed. It’s a real sign of a champion and for me it’s a case of ‘when’ not ‘if’ with Aron.

“As a team we’re not just here to make up the numbers. I’m not saying we’re going to win the title next year but ultimately that is what we’re here to do in the future. We’re collecting a lot of data and experience this year, which can only help us to improve again in 2015, and in the years to come we want to be serious title contenders.

“It is therefore fantastic to have already re-signed a race-winner for our team next season. Aron is completely focused on the job and alongside the team will continue to work hard for success.”

Smith’s next event will mark a whirlwind period for the Irishman as he returns to the circuit – Knockhill – where he made his BTCC debut only three years ago. Having just secured another lights-to-flag victory last time out at Snetterton and now extending his contract into 2015, Smith will be all smiles when the BTCC makes its annual visit north of the border.