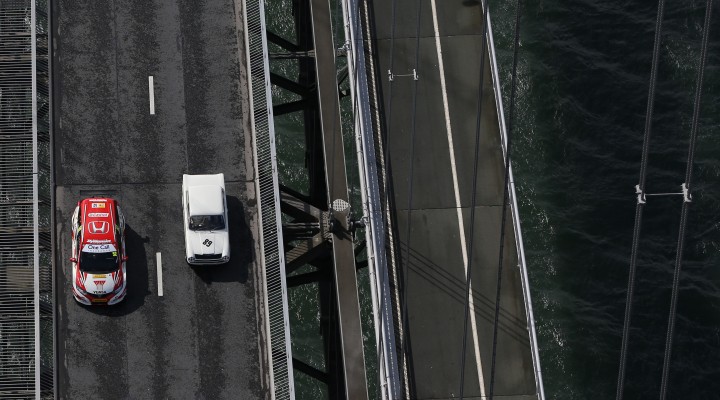 The Dunlop MSA British Touring Car Championship blasted into Scotland in style today (21 August) with an incredible parade across the Forth Road Bridge.

The four current Scottish-based BTCC drivers – Gordon Shedden, Aiden Moffat, Glynn Geddie and Dave Newsham – all made the crossing in their flame-spitting machines, and were joined by a spectacular cavalcade of cars once piloted by the legendary Jim Clark, who won the BTCC 50 years ago.

As the UK’s biggest series makes its annual trip north of the border, the world-famous bridge was closed to celebrate Clark’s achievement, and the very Lotus Cortina he drove to championship glory back in 1964 went over the bridge alongside Shedden’s current Honda Yuasa Racing Civic Tourer.

The Forth Road Bridge was also celebrating its own 50 years in operation, whilst Knockhill circuit is marking its 40th anniversary throughout 2014.

The leading pair of cars were followed by Moffat’s Chevrolet Cruze, Geddie’s Toyota Avensis and Newsham’s Ford Focus, all of which roared over the famous structure just behind an amazing Jim Clark Lotus F1 car.

An impressive turnout of passionate fans came to see off the cars from the staging area south of the bridge, with many more lining the roads to see the fantastic spectacle unfold. The Firth of Forth rang out to the sound of racing engines in anticipation of the 31-car spectacular that will take to the Knockhill circuit in Fife this weekend.

As well as the current stars, another Scottish legend – double BTCC champion John Cleland – also joined the parade in a DKW, adding yet more celebrity sparkle and automotive history to the event.

The four modern BTCC cars have now joined the rest of the 2014 line-up in the Knockhill paddock ahead of a weekend of flat-out racing action around the challenging 1.27-mile circuit. Local hero Shedden has already won three times at his home venue and he’ll be hoping to add to his tally as he looks to hunt down championship leader Colin Turkington this weekend.

BTCC Series Director, Alan Gow, said: “It’s great to have seen so many fans and media here for what has been a truly memorable celebratory event. This has been a fantastic way to kick off proceedings ahead of yet another big weekend in the BTCC – now we look forward to welcoming another huge crowd to Knockhill.”

Honda Yuasa Racing driver, Gordon Shedden, said: “This was a once in a lifetime opportunity. To drive across the Forth Road Bride in a race car is incredible enough, but to do it in the company of Jim Clark’s championship-winning Cortina and a few of his other cars as well is very special. It’s special for Scottish motor sport as well – only three of us have won the BTCC and two of us are here today! I’m sure Jimmy will be looking down on us with a smile on his face thinking it’s pretty cool as well! It’s the only time we get to race in Scotland each year, and it’s great to come home and race – the crowd here are really into their motor sport, they are passionate and that transfers to me when I drive too. Hopefully they can spur me on to some good results this weekend.”

Laser Tools Racing driver, Aiden Moffat, said: “This event has been absolutely fantastic. It’s great for Knockhill and for Scottish motor sport in general. I’m excited to be home and racing up here again – I started my BTCC career at Knockhill last year and I’ve come on a long way since then. It’s the best I’ve ever felt in the car and the best the car has ever been, and to be kicking off the weekend taking part in a bit of BTCC history is the perfect start.

AmDTuning.com driver, Dave Newsham, said: “I think this is great – whenever I’ve mentioned to people that I’d be going over the Forth Road Bridge in a racing car they couldn’t believe it – it’s brilliant! Jim Clark was an absolute legend and it’s great for us as a team and myself personally to be a part of this. I’ve got quite a lot of support here, and it’s only two and half hours up the road which is unusual for me! Knockhill is a great circuit, it’s actually where I competed in my first ever car race, and I’m looking forward to racing here again this weekend.”

United Autosports driver, Glynn Geddie, said: “It’s good to be a part of such an important event – the turnout from fans and media has been mega and obviously it’s something I’ve never done before! I’m proud to be here – there will be a lot of people coming down to support me from Aberdeen this weekend which is always good. We’ve got a lot of work to do but I’m looking forward to racing at Knockhill again – I’ve not driven the circuit in a few years so it’ll be good to get back out there.

Former double BTCC champion, John Cleland, said: “This is celebrating the life of a star – no matter what Jim Clark drove, he would win. I think Knockhill have done a fantastic job of raising the profile of this event by somehow getting the Forth Road Bridge – the main arterial road between the north and south of Scotland – closed for the parade. I still closely follow the BTCC, I’m actually racing myself this weekend in my 1997 Vectra, but I’ll definitely be watching the races because Knockhill always provides some great racing, especially if it rains!

“Gordon definitely has a chance of being up there at the front – and with the young guys coming through as well there’s plenty to look out for. When you think that this small country of five million people has produced some of the world’s best racing drivers in all disciplines, it makes you very proud, especially on a day like today.”