MG ready to go forth and battle at Knockhill 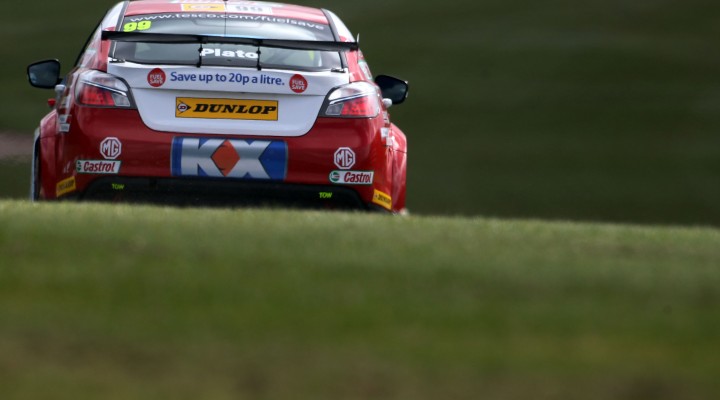 Two-time BTCC champion Jason Plato and young gun Sam Tordorff head north to Scotland this weekend, knowing they are in for a fierce fight for points.

The MG KX Clubcard Fuel Save Team has historically not faired well at the hilly 1.3 mile, 9 turn circuit, as Team Principal Ian Harrison concedes: “It will be a toughie; it’s going to be a case of just getting through it.”

That said the Banbury based team came away from Snetterton three weeks ago with a bigger haul of points than the year previous and hopes are high for a similar outcome this weekend in Fife.

The first two rounds of the 2014 season yielded promise and points a plenty for both Plato and Tordoff, but a tricky weekend at Thruxton in Hampshire gave little cause for joy, and the trip to Cheshire’s Oulton Park, so often a happy hunting ground in years gone by, offered slim pickings. Likewise, the Yorkshire circuit of Croft, a home venue for both Plato and Tordoff, saw the red, white and blue MGs fighting lower down the order than normal. However, Plato, the most successful driver in the history of the BTCC, kept his title challenge alive by securing his 186th podium finish in race one, providing Rob Collard with a classy lesson in defensive driving to boot.

“It’s the same every year,” continued Harrison. “We go to Brands and Donington and it’s happy days, then Oulton Park is normally our third good track, but the layout for this year didn’t really do us any favours.”

Approaching Knockhill, Plato lies third in the standings (236 points), two places higher up than in 2013, and Tordoff (8th – 138 points) is hitting a purple patch, having produced arguably a BTCC career best drive in race two at Snetterton. MG sit just five points behind Honda in the manufacturers’ standings and MG KX Clubcard Fuel Save are still within 100 points of leaders eBay Motors in the Teams’ championship.

With Rockingham, Silverstone and Brands Hatch GP remaining after the trip to the Highlands, the MG KX Clubcard Fuel Save Team is in good spirits about the remaining races with everything very much still to play for.

“We should be on the money again at those tracks, hopefully we’ll have a good end to the year,” concludes Harrison.

The Knockhill weekend begins on Saturday with two 40-minute practice sessions; qualifying begins at 15:05 and will be broadcast live on the ITV website. Sunday is race day with three action-packed races expected. Race one begins at 11:45, race two at 14:17 and the reverse grid race at 17:07. Don’t forget to check out the Twitter and Facebook links throughout the weekend for updates.