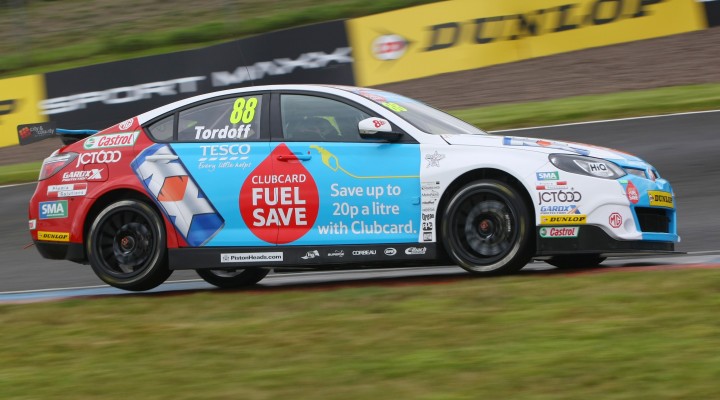 Rob Austin produced a stunning last gasp lap to haul his Exocet Racing Audi A4 on to the front row of the grid for the second consecutive season at Knockhill, following his pole position at the Scottish circuit in 2013.

In truth Turkington dominated the session and eventually improved on his own benchmark late on, setting the fastest time in every sector to extend his advantage over Tordoff to more than four tenths of a second. The eBay Motors driver’s time of 51.705s is also a new qualifying lap record at Knockhill, although the re-profiling and shortening of the final hairpin over the winter has undoubtedly quickened the overall pace of the circuit.

MG KX Clubcard Fuel Save’s Tordoff was in the top order throughout and absolutely deserved to head the rest of the field. The times were incredibly close, however, with the next 15 cars separated by less than half a second.

Reigning champion Andrew Jordan predicted he’d be third on the grid and he was true to his word, pipping the Honda Civic Tourer of Scotsman Gordon Shedden by just 0.070s. Matt Neal’s sister Honda was next up on the timesheets as he saw off the challenge from old adversary Jason Plato in the MG – the two separated by two hundredths of a second.

Mat Jackson continues to be the star Ford Focus performer as he claimed eighth on the timesheets, whilst his Airwaves Racing team-mate Fabrizio Giovanardi endured a rather frustrating session. The double champion had all of his times excluded after failing to stop at the weigh scales when asked to do so by officials mid-session. He was allowed to rejoin in the final five minutes after completing the checks but he could only manage 19th.

Rob Collard and Nick Foster ensured all three eBay Motors BMWs were inside the top ten although Collard, like team-mate Turkington, will also serve a grid penalty. The multiple BTCC race winner will start the opening race from the back of the grid after being adjudged to have committed his third driving offence of the season last time out at Snetterton. To rub salt into the wounds Collard also had a spin during the session, although he was able to recover without any damage to the car.

Home favourite Glynn Geddie produced his best qualifying performance of his short BTCC career so far with 11th, which will result in tenth on the grid tomorrow due to the aforementioned penalty for Collard.

There was a brief stoppage during the session to recover the stricken Power Maxed Racing machine of Chris Stockton after he lost control of his Chevrelot Cruze on the exit of Leslie’s and slid into the gravel.

Colin Turkington said: “It was a really strong lap at the end there – the car was good all session but it was the same for everybody trying to get a clean lap in when the tyres were at their best. I was pushing really really hard, so it’s pleasing to get the fastest time even though I won’t start at the front. I need to be careful tomorrow. We’ve got a quick car and I want to make progress through the pack, but passing around here is going to be really tricky. At least the speed is in the car – it’s Knockhill so anything can happen, so I first of all need to make sure I get to the finish. The car has been good in both wet and dry conditions, but we can make more progress in the dry so if it stays like this then we should be in good shape.”

Sam Tordoff said: “I wasn’t really expecting that coming into today! I had a much better feeling in the car than I did this morning in free practice. We’ve changed a lot since last year where we struggled with the car over the kerbs, and we’ve brought it on a long way. Immediately the car felt much better than it has done, and since FP1 we’ve just been chipping away to get towards the front. We’ve been in the top six all day, and when you can build momentum like that you can go into qualifying much more confidently. We tweaked something and the changes really worked, so I can’t not be happy with that. It’s really important to be at the front around Knockhill – hopefully I can retain the lead off the line and get my head down – my car is working well so I’m happy.”

Rob Austin said: “I’m really chuffed with that session – we know the car is good here and we have a really good set-up. I’ve always loved this place and gone well here too. It’s a much more competitive grid this year, so to be on the front row again two years running makes it particularly sweet. We’ve had a great car at Croft and earlier in the year at Brands – we’ve missed out on some really good opportunities so I’m over the moon to put it all together here. Our race pace is always our strong point, so I’m mega confident. If I can jump Sam – who put in a very impressive lap I must say – at the start it’ll be ideal, but I think there will be plenty of opportunities to make a move.”

Andrew Jordan said: “I’m quite happy with that. I still don’t feel like we’ve got the car exactly where we need it – it’s quick but it’s a handful to drive at the moment. We need to try and make it a bit more user-friendly for the races because I had quite a few big moments in that session. We’re up at the sharp end though and it’s nice to be back up there after what happened on our last Saturday – it’s good to get it out of the way and be in the ball park. It’s going to be busy tomorrow – hopefully we can get a win and some podiums to reward the hard work of the team. They’ve completely rebuilt the car since Snetterton, so to come out there and be challenging at the front is really good.”

Gordon Shedden said: “I’m fairly happy with that – given the weight we have on the car that is about where we should stack up. We’ll make the best we can of the opportunities we’ve got here this weekend and try and score some good points. The atmosphere here is going to be brilliant. For me a bit of changeable weather tomorrow would be very helpful, but I think it’s going to stay nice and sunny for the crowds! It’s never easy to predict what’s going to happen, so we’ll be going flat out regardless.”