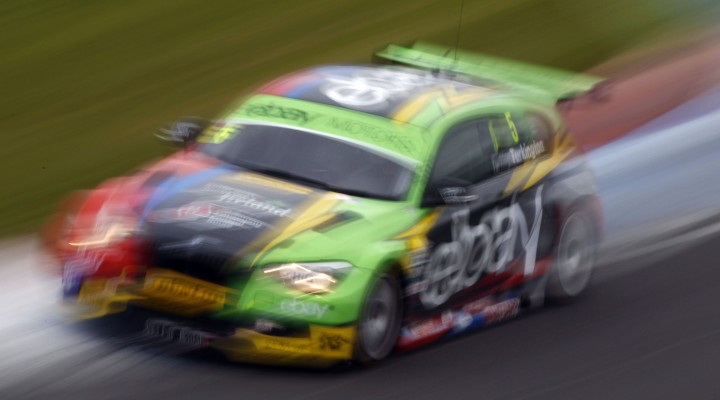 Championship leader Colin Turkington has proved his pace in both wet and dry conditions so far at Knockhill, this time setting the benchmark in a rain interrupted free practice two.

Turkington’s team-mate Nick Foster was second and will incredibly be the only eBay Motors driver in with a chance of taking pole position later this afternoon.

Rob Collard was tenth; following up his second position from earlier this morning, but the multiple BTCC race winner will not contest for honours in qualifying. Collard will be sent to the back of the grid regardless of his performance, after collecting his third penalty of the season last time out at Snetterton, whilst Turkington has his own eight-place grid penalty after contact with the Honda of Matt Neal in the final race at the Norfolk venue.

“It’s a confidence boost that we’re quick out of the box and if we can keep moving forward then we’ll be on for some good results,” said Turkington. “The grid penalty doesn’t change anything for us until tomorrow – we’ve got to qualify as best we can, and if the car is quick then we’ll be aiming to come through the pack, but three good points positions is what we’re aiming for.”

Coincidentally Neal’s morning at Knockhill has been mixed as he set the sixth fastest time in free practice two before ending his session in the gravel after going off at the chicane during a heavy rain shower.

BTCC teams seemed to pair off at the top of the order as the eBay Motors duo were followed by both MG KX Clubcard Fuel Save cars, who in turn saw off the challenge from the Honda Yuasa Racing pilots.

Neal’s incident wasn’t the only on-track moment as Jack Clarke’s Crabbie’s Racing Ford Focus recovered from a wild moment, whilst the first of two red flag periods was brought about when Lea Wood went off into the gravel on the exit was Leslie’s.

“We tried a different set-up,” said Houseman Racing’s Wood. “It’s certainly quick but a bit on the edge too and I was just too hot going into turn one. It’s a bit of a shame but not too much harm done.”

The only harm done to pace-setters eBay Motors is the pre-event penalties issued to its two lead drivers, meaning Turkington and Collard will not be able to claim pole position regardless of their speed.

Stable-mate Foster may still fancy his chances, but the other championship winning teams are also eyeing top spot. Will it be Honda, Pirtek, MG or maybe even last year’s pole man Rob Austin? With the unpredictable weather and 31 touring cars circling arguably the tightest circuit on the calendar it really is anyone’s guess at this stage as to who’ll be taking pole position.

You can watch all the action from qualifying LIVE at www.itv.com/btcc or keep up to date via the BTCC website’s live commentary and audio section.