Turkington tops the times at Knockhill 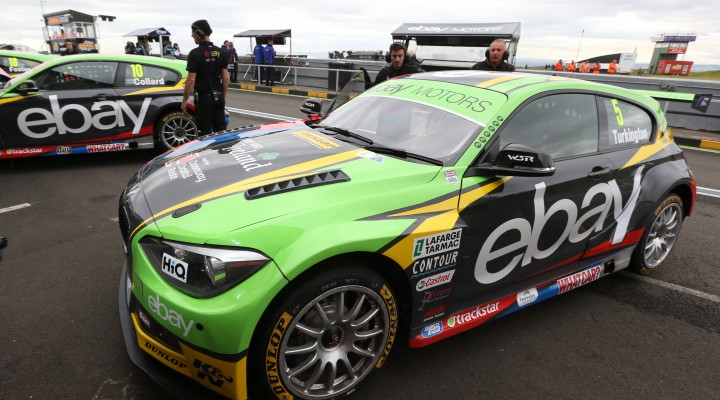 Colin Turkington led an eBay Motors one-two in free practice one at Knockhill as the 2009 champion clocked a breath-taking time ahead of team-mate Rob Collard.

Championship leader Turkington set three blistering laps in-a-row, all of which eclipsed the former with each effort being faster than any of his 30 competitors could manage.

“The car is going well the morning – we were quick here last year so were confident we’d have a good car,” he said. “There were no major issues in that session, the biggest challenge is actually going to be getting a clean lap in – a lot of people probably didn’t get to show their true performance in that one because of the traffic.”

MG KX Clubcard Fuel Save showed well throughout the session with Sam Tordoff topping the times early on. The young gun continued to acclimatise himself to the tight 1.27-mile circuit and eventually ended up sixth on the time sheets, while his experienced team-mate Jason Plato set the third fastest time late on.

Wedged in-between the MG6s were home hero Gordon Shedden and reigning champion Andrew Jordan, both who’ll be looking to close the gap on Turkington this weekend.

VW machines held the top three positions at mid-distance with double champ Alain Menu sitting ahead of his team-mates Warren Scott and Jack Goff. The Swiss superstar eventually had to settle for seventh while his Chrome Edition Restart colleagues dropped down the order.

Nick Foster made it three BMWs in the top eight, whilst the Audi A4 of Rob Austin and Civic Tourer of Matt Neal rounded out the top ten.

Outside the top order there were eye-catching runs from BTCC rookies Glynn Geddie and Jack Clarke. United Autosports’ flying Scotsman Geddie hasn’t raced at his home circuit for a number of years but he still produced the fastest time of any of the Toyota Avensis drivers.

“It was a good start to the session – we had some brake issues which meant we couldn’t improve at the end, but it’s still encouraging,” claimed Geddie. “I’m looking forward to getting back out there on a fresh set of rubber. It’s good fun out there, it’s busy that’s for sure! It’s the first time I’ve been out on slicks in a front-wheel drive car around this circuit, we’ve got some changes to do to make the corner exit better for the next session, so hopefully we’ll keep moving forward.”

Clarke has only ever competed at Knockhill once – way back in 2006 when he was just 17-years-old – but he produced a good performance in FP1. Well inside the top twenty throughout he then put in a late three lap blast with his quickest time just falling short of Geddie’s effort by 0.0132s.

“I remember bits of it from 2006 but to be honest it was like learning a completely new circuit,” said Clarke. “I really enjoyed it – it’s just such a fun track, quite unique. We didn’t change the car too much as it was just a case of getting up to speed. I’ve seen where we’re already losing a bit of time but it was a really good start to the weekend.”

Click here for the final classification from free practice one at Knockhill.