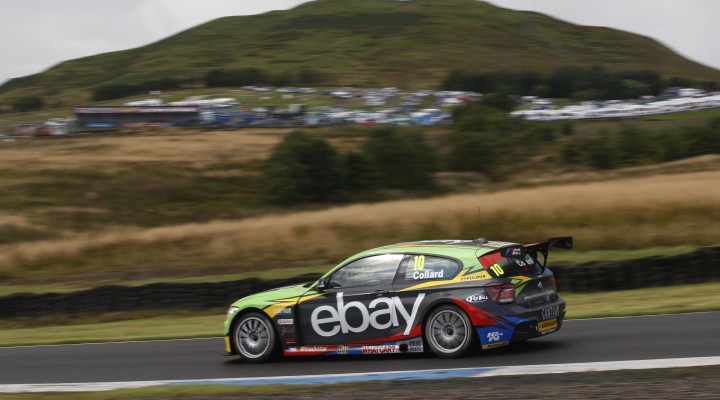 Rob Collard rounded off a great day for him and the eBay Motors squad by leading home a 1-3-4 for the team in the final race at Knockhill, whilst AmDTuning scored its first ever podium with a second place finish for Dave Newsham.

Pole-sitter Nick Foster made a perfect getaway and comfortably held off the trio of Fabrizio Giovanardi, Tom Ingram and Newsham in the early stages. Collard made relatively light work of the cars ahead of him, however, and was up to second after just a few laps.

Running on the Dunlop Sport Maxx soft compound – which has powered all three winners for the first time ever today – Collard was instantly on the back of his team-mate Foster. The pair duelled for a lap or two but Collard eventually made his move, before a slight mistake by Foster left him in the clutches of Newsham, Ingram and Colin Turkington. Giovanardi’s challenge had already faded after running off track whilst Turkington also nipped by Foster. The Toyota Avensis of Ingram was muscled out of contention, which left Newsham, Turkington and Foster to fight it out for the final two podium positions.

The BMWs closed down Newsham’s Ford Focus at a rate of knots but the Inverness-based racer held on as Foster fought hard in an attempt to repass Turkington for third. The championship leader saw off the challenge of his stable-mate to complete the podium and a quite sensational day of racing in Scotland.

Andrew Jordan and Gordon Shedden, who have been inseparable throughout the day, were again locked in battle in race three. Despite making contact on a number of occasions both Honda drivers made their way through the order to finish fifth and sixth respectively.

WIX Racing enjoyed an impressive day after a difficult display in qualifying left Adam Morgan way down the order. After two top six finishes in the opening encounters, the Mercedes driver took a solid seventh in the finale.

Alain Menu claimed eighth for Chrome Edition Restart Racing, ahead of a frustrated Ingram who’d falling down the order after contending for a podium in the early running. MG KX Clubcard Fuel Save’s Jason Plato rounded out the top ten although he did have an incident with the Audi of Rob Austin at the final hairpin, which left the latter out of the race.