Trio of new 2014 winners at Knockhill 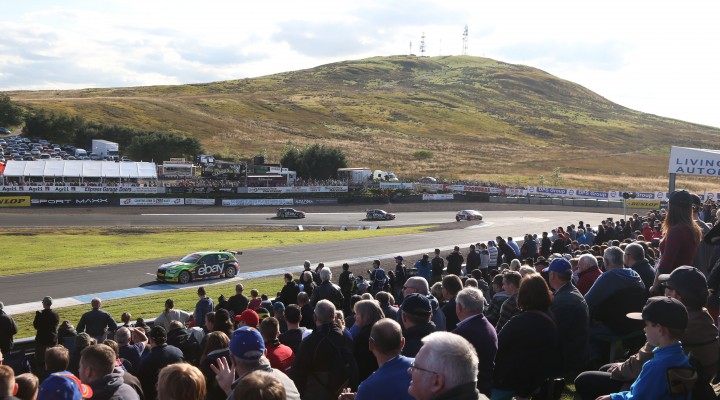 The biggest crowd at Knockhill in 15 years witnessed three titanic Dunlop MSA British Touring Car Championship battles as a trio of drivers took their first wins of the season.

An action-packed 27 laps of racing included myriad of incidents and overtakes throughout the order, but it was the most experienced driver on the grid who managed to keep out of trouble to win his first race for more than a year and a first in the Honda Civic Tourer model.

Mat Jackson took the 20th BTCC victory of his career and the first in nearly two years with a flawless performance in the next bout. The Airwaves Racing driver made a clean getaway when the Honda duo of Neal and Shedden ran into trouble. Neal was given a drive-through penalty for jumping the start while Shedden dropped to the rear of the field after early contact with Austin.

Race three provided the third different winner of the day, which also completed a hat-trick of victories for the Dunlop Sport Maxx soft compound for the first time in BTCC history.

Pole-sitter Nick Foster produced a good start but he was soon under pressure from his eBay Motors team-mate Rob Collard who had made his way from sixth to second in the early stages. Collard eventually edged his way past and never looked back – taking his first victory since 2012 at the same venue – but there was a frantic scramble behind for the final podium positions.

It was to be an emotional rostrum for Dave Newsham and the first ever for his AmDTuning.com team as the Inverness-based driver hauled his Ford Focus into second, defending well from the BMWs of Turkington and Foster.

Turkington’s own podium capped a remarkable turnaround for the Ulsterman after his day had got off to the worst possible start. Contact with a combination of Plato and Jackson forced him into the gravel and out of race one, but the 2009 champion produced a sensational drive in the second encounter.

Starting at the back of the grid Turkington had scythed his way up to fourth by the finish, producing pass after pass in the flying BMW 125i M Sport. He went one better in the final showdown to ensure that he left the Scottish circuit with the same 23-point advantage that he’d arrived with.

Shedden maintains second in the standings whilst Plato closed the gap in the chase for the championship. Collard is up to fourth; ahead of reigning champion Andrew Jordan and race two winner Jackson, although all three can only be considered outsiders for the title.

To demonstrate the quite staggering racing on show at Knockhill, the total of nine podium positions on offer over the course of the weekend were filled by an unprecedented eight different drivers…

Matt Neal said: “I really needed that win. The soft tyre worked well, but it was quite an unexpected result. We thought the Civic Tourer would struggle here so to get a double podium is great. The car felt fantastic and I was able to keep my nose clean as all manner of chaos kicked off around me! When I got into second and saw how far ahead the leader was I did think it would be a tall order to close the gap, but I kept on pushing and it was awesome to win again and break my Civic Tourer duck.”

Mat Jackson said: “Today has been a very long time coming! The car has been absolutely fantastic this weekend, and it’s massive thanks to the team that have worked so hard for so long to get us back to the top step of the podium. We ran the soft tyre in that one and it worked really well. Let’s hope wins come like London buses now, we could do with a few more!”

Rob Collard said: “We’ve shown lots of promise this year and it’s finally come together for me. As a team we’ve been unstoppable, Colin is driving brilliantly and Nick has been right up there today too, it’s such a pleasure to drive for eBay Motors. I got a cracking start in the last race and then it was just a case of getting my head down. I love driving on the soft tyres, and the car worked really well on them today. After starting at the back in the first race it’s just brilliant to be back on the top step.”

Colin Turkington said: “I’m pleased with how the day has turned out. We started on a sour note with the DNF, but recovered really well. Overall it’s been a good weekend not just for myself but the whole eBay Motors team. It could have gone either way for me, but to leave Knockhill with the same gap we came in with and have another race weekend chalked up is very important. There was only so much I was prepared to risk in the last race, but to get a podium is fantastic.”

Gordon Shedden said: “The BTCC was at its best at Knockhill today. It’s been a stunning day – it’s great to see so many fans here, and when there’s action like this it’s no wonder. I didn’t expect the car to be as strong as it was around here, so we’re going to keep pushing on for the rest of the season at circuits that should suit us better. It was always going to be difficult to make progress with so many cars and such a tight circuit, but we’re still in touch.”

Jason Plato said: “We made some pretty big changes to the car between the races today and it improved. It was apparent that the soft tyre was better, so it would’ve been interesting to see how we’d have done against Mat Jackson on the same tyres. I’m more confident with the car now and we’re not a million miles off.”

Rob Austin said: “In essence it’s been a very successful weekend. Everyone in the team, from the mechanics to all our sponsors, have really pulled together very well and we’ve capitalised on a circuit where we know we can be strong. I also love Knockhill and being on the podium here, particularly with such a huge and enthusiastic crowd – is always a special experience. It’ll be very important to do the same at Rockingham in two weeks. But while I’m delighted with our results I can’t help feeling frustrated – I really wanted a win and had the car and opportunity to achieve that.”

Dave Newsham said: “I wasn’t going to make it easy for anyone to get past me in that one. It’s a huge thank-you to the team – the car has been superb today and all the hard work has finally come together. We needed the test at Snetterton before this round to get some good time in the car to try lots of things, and I think we’ve proved that it worked. This has always been a special place for me as I’ve had a lot of success here in the past – my mum passed away on Thursday night and this one is for her. She was definitely pushing me along.”

The next stop for the 2014 Dunlop MSA British Touring Car Championship will be at Rockingham on 6/7 September.

Race Two
Marc Hynes was verbally warned for an incident involving Warren Scott. As this was his third offence during this season, he was sent to the back of the grid for race three