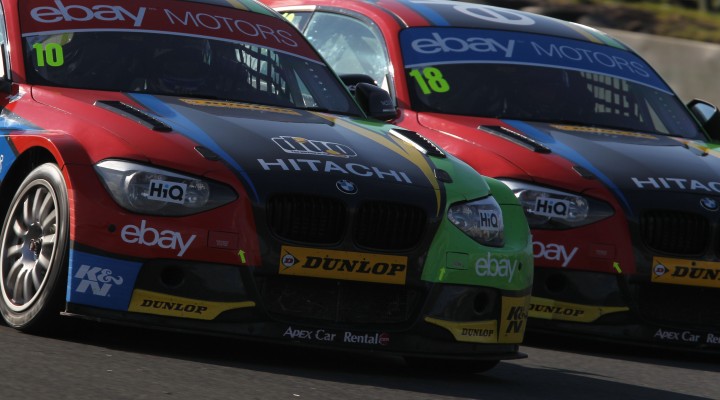 A ‘phenomenal’ win for Rob Collard, a comeback podium for Colin Turkington, plus a trio of top ten finishes for Nick Foster saw the squad extend its advantage in the teams’ standings, whilst critically Turkington maintained his lead in the chase for the title.

Turkington dominated every session on Saturday in his BMW 125i M Sport, eventually topping qualifying by nearly half a second, whilst Rob Collard and Nick Foster made it three WSR cars in the top ten with their own impressive performances.

Despite grid penalties being carried over from the last event at Snetterton, both Turkington and Collard were keen to show their fighting spirit in race one, with the latter coming from the back of the grid to a fantastic 12th place finish.

Foster claimed a solid tenth but Turkington suffered a huge setback when contact left him in the gravel and out of the race.

With his advantage at the top of the standings reduced to just nine points Turkington went on to produce an absolute driving masterclass in the second contest, scything his way from the rear of the order up to a mind-blowing fourth place. The Ulsterman was immediately followed home by Collard, whilst Foster scored another eye-catching tenth place.

The best was yet to come for eBay Motors, however, as a near podium clean sweep in the final showdown left their rivals in the shade.

Pole-sitter Foster swept into a comfortable lead off the line but soon had stable-mate Collard pressuring behind, after the multiple race-winner had stormed through from sixth on the grid. Collard made his move to the front as Foster slipped back into the multi-car battle behind.

When the dust settled Turkington and Foster found themselves in third and fourth respectively, and eventually hounded down second placed driver Dave Newsham, until the finish.

As the chequered flag came out Foster narrowly missed out on his first podium of the season, whilst Turkington scored his 13th rostrum of an incredible campaign.

“We nearly had it,” said Foster. “We’ve gone really well this weekend with our best qualifying performance. Race three – wow – it was just a great race wasn’t it. I really wanted that podium and it was difficult at times, but Colin is going for the championship so we had to be careful. Overall it has been another great one for the team and I’m happy with my performance.”

Such was the fight back from 2009 champion Turkington over the course of the day that he eventually left the Scottish circuit with the same 23-point advantage that he’d come into the weekend with.

“It has been a really tough weekend but the pace of the eBay Motors BMWs has been brilliant. We’ve got to be happy with the points return considering what happened in the first race. To leave here with a podium and to maintain the gap in the standings is just so important. I’m really pleased for Rob too – he deserved that win.”

As mentioned by Colin himself there was no denying the hero of the hour for West Surrey Racing, and that was Collard who had streaked away from the field to win his first BTCC race since Knockhill in 2012.

“You don’t like to predict too much but I thought we might be in with a chance of a reverse grid win. We exceeded our expectations in races one and two, fighting our way up from the back of the grid. That final race was just phenomenal – you just can’t beat our eBay Motors team at the moment. Everyone is on top of their game and I’m just over the moon with this victory.”

After a nervy day watching and directing his trio of racers, team boss Dick Bennetts was delighted to get away from Scotland with his squad leading the chase for four titles.

“It didn’t start off too well with Colin’s incident but it turned out to be fantastic with Rob’s win,” he said. “Everyone has worked so hard and it’s thanks to the whole team, all of our loyal sponsors and supporters. Rob really deserved it  – we surprised a few people by holding on to the soft tyre for race three with him, but we thought it could work, and thankfully it did. Both Colin and Rob produced sensational drives through the field during the day, and Nick drove brilliantly too. To move away from here having increased our lead in the teams standings and for Colin to keep ticking away at the top is fantastic for eBay Motors.”

eBay Motors will look to maintain its championship leading position when the BTCC rolls into Rockingham in two weeks time (6/7 September) for rounds 22, 23 and 24 of the season.