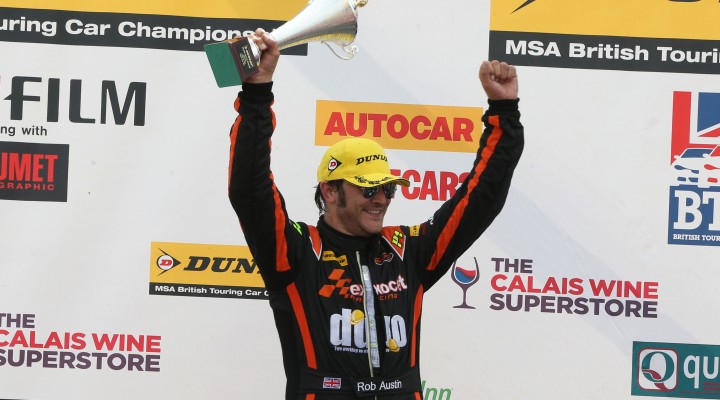 Worcestershire’s Rob Austin was the only driver to twice finish on the podium in three highly charged Dunlop MSA British Touring Car Championship races at Fife’s Knockhill circuit today – results which keep him firmly in the hunt for a top ten finish overall in the UK’s premier motor racing series.

Rob made it two front row starts in two years at Knockhill by qualifying second fastest on Saturday for the opening contest. Second is where he would finish the race despite a scary trip off the track at 100mph which dropped him briefly to fifth following contact with the Honda Civic Tourer of Gordon Shedden.

In race two, again from second on the grid, Rob made his move for the lead at the first bend but ran wide on exit which dropped him down to third – a position he held to the chequered flag.

A collision with Jason Plato in the final race of the day put Austin out of the running, but the two podiums still made it a successful weekend for the family run outfit. The Rob Austin Racing team now has just a week to return to base in Pershore and prepare Rob’s Audi ‘Sherman’ in time for the BTCC’s next three rounds on Sat 6/Sun 7 Sept at Northamptonshire’s Rockingham circuit where last year he achieved his and his squad’s maiden race win in touring cars.

Austin said: “In essence it’s been a very successful weekend. Everyone in the team, from the mechanics to all our sponsors, have really pulled together very well and we’ve capitalised on a circuit where we know we can be strong – I also love Knockhill and being on the podium here, particularly with such a huge and enthusiastic crowd – is always a special experience. It’ll be very important to do the same at Rockingham in two weeks.”