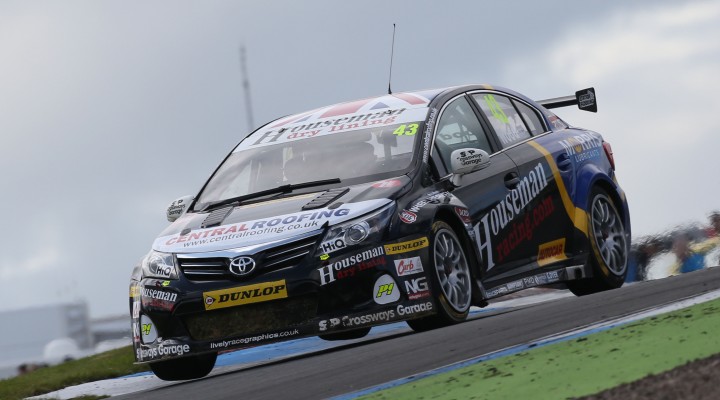 We caught up with reigning Jack Sears Trophy winner Lea Wood in the Rockingham paddock earlier today (Friday). The Hereford-based racer talked candidly about his and the Houseman Racing team’s maiden foray into the NGTC ranks of the BTCC this season. He looked ahead to the weekend and further beyond as the 30-year-old continues to make progress up the toughest grid in UK racing…

How much are you looking forward to the weekend ahead?
“I love Rockingham, it’s always great to be here and it usually provides some good racing. We’re looking forward to having a really positive weekend after a particularly difficult one at Knockhill last time out, but we’ve made some changes to the car and we’re raring to go.”

We understand you have some special guests here at Rockingham?
“Yes we do. Sean Moore – the drummer from the Manic Street Preachers – will be coming along plus we have a very special family that featured on BBC’s DIY SOS programme last night. They really are a wonderful family from Hereford and he’s just a lovely lad who really likes his racing, so we’re all very much looking forward to the weekend.”

How challenging has the season been so far for the team?
“Everyone knows that we didn’t get the car finished until the day before the opening round at Brands. To achieve what we have is unbelievable and it’s been a huge push. We’re streets ahead of some but we’re quite a way behind the others. We know there’s a lot of work to do, but we’ve made huge progress and we’ve collected some great data and experience for next season.”

What are the main areas you are focussing on improving?
“Qualifying is key. Our race pace is very good but it’s just so tough. If we could qualify a bit better and nearer the front then we hope the rest will fall into place. It’s just so competitive throughout the field – people probably just look at the positions without realising just how hard it is even to get into the points.”

Just how exciting is it fighting bumper-to-bumper in the BTCC?
“That’s what makes this championship what it is – it’s fantastic. The NGTC rules make it just so competitive and we’re having such good battles throughout the field. Everyone wants to get to the front and of course we can’t all be there but it’s massively exciting taking on the challenge.”

You must be really proud of everyone involved in the Houseman Racing team?
“We built the car in just six weeks and it was a massive effort by everyone at the team. It was unbelievable just to drive the thing at Brands and we had no problems. To make the progress we have since then is a huge credit to everyone in the team and to be doing what we are in this championship is a great effort. We’ve stepped our level up both on and off the track. The car is always turned out immaculately and we want to get everything right. We’ll keep pushing and getting stronger that’s for sure.”