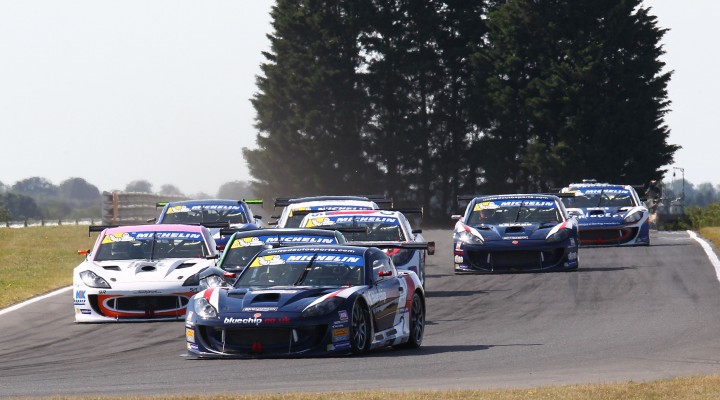 With unrivalled views from Rockingham’s incredible grandstands, there’s no better place to watch the BTCC’s supporting cast do battle around the fearsome Northamptonshire circuit. Check out the reports below for the latest on every championship and make sure you’re right up to date before the action kicks off this weekend…

Six race wins and a further seven podiums afford 2012 Ginetta Junior Champion Robertson the points advantage, whilst a strong latter half of the season for 2012 Michelin Ginetta GT4 SuperCup winner Breeze has seen him slice the deficit to the top of the table in recent meetings.

With the championship crown at the forefront of everyone’s mind, expect the battle lines to be drawn and some fantastic racing on offer at Rockingham this weekend.

Ginetta Juniors
Having finished nine of the 14 races run thus far on the top two steps of the podium, Jack Mitchell continues to lead the Ginetta Junior Championship by a comfortable margin, but with his closet rivals winning races, the stage is set for an exciting pair of races at Rockingham Motor Speedway.

With three wins each, James Kellett and Lando Norris occupy second and third place in the standings, and whilst Norris has one further podium (eight to Kellett’s seven), consistent results for Ginetta Junior Winter Series Champion Kellett sees him seven points ahead coming into the weekend.

Having enjoyed the majority of the Friday test days within the Ginetta Junior Championship, race newcomer Esmee Hawkey is hoping to be challenging the pack as she joins the grid from this weekend onwards.

Applications for both the Ginetta Junior Scholarship and Ginetta Junior Winter Series are now open, visit www.ginetta.com for all the information you need. In the meantime, follow all the action from this weekend live on Twitter @GinettaCars.

Renault Clio Cup
During the opening encounter last time out at Knockhill it was Mike Bushell who took top honours ahead of Ant Whorton-Eals and Jordan Stilp. Bushell’s excellent points haul, combined with one of championship leader Josh Cook’s least successful race meetings of the season, mean the VitalRacing with Team Pyro driver has closed to within 16 points of the championship leader with four races remaining.

Jordan Stilp secured his third win of the Courier Connections Renault UK Clio Cup season during the second race at Knockhill to perfectly cap off a tremendous double-podium finishing weekend and climb into the championship top four.

Porsche Carrera Cup GB
The battle for the overall title in the 2014 Porsche Carrera Cup GB hotted up even further at Knockhill (23/24 August) as Michael Meadows took a double win to close in on championship leader Josh Webster as the latest type-991 911 GT3 Cups raced in front of a huge BTCC crowd at the Scottish track.

Victor Jimenez (Madrid: Redline Racing) qualified superbly in second and claimed third in the opening race. Then, a clutch problem before race two forced him to start from the pit lane and he raced through to finish sixth and earn the ‘driver of the weekend’ award, while Samsung UHD TV Racing was named as ‘team of the weekend’.

Jordan Witt (Nantwich: Redline Racing) was the class of Pro-Am1 and won twice to give himself an outside chance of catching points’ leader Justin Sherwood (Loughborough: Team Parker Racing).

Rob Smith (Maldon: Redline Racing) won a set of tyres as part of Michelin’s long-standing support of the championship. Before the start of testing at each race weekend, a name is drawn from a hat to receive the tyres, with a value of more than £1200.

Saturday race winner Ashley Sutton made a dramatic exit from the first of today’s races, crashing out at the final corner after his throttle stuck open. He was unhurt, and able to take the start of the second race in a spare car, battling through from the back to take the Scholarship class win.