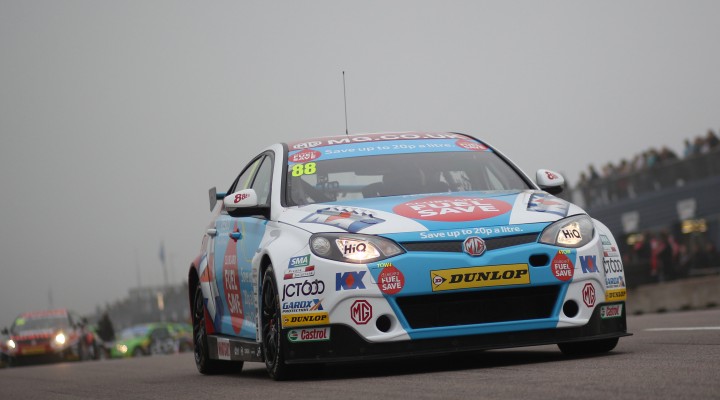 The Northamptonshire circuit has been beset by early morning fog, which certainly caused issues for fans trying to watch the action from the fantastic Rockingham grandstands and it also provided the 31 BTCC drivers with some unexpected challenges.

Extremely limited visibility and low track temperature meant for a greasy surface throughout the 40 minutes of running, but that didn’t stop Pirtek Racing’s Jordan from punching in the first representative time. Jordan said, “The car felt good – probably the best out of the box feeling we’ve had for the last couple of meetings so I think we’ve got something solid to work with. It also seems to be looking after its tyres very well which is very important around here. We’re in a strong position to fight right at the front this weekend – we’re going to focus more on race set-up because of the tyre wear, but we’ve got a good base car to start with.”

The Mercedes of Adam Morgan and BMW of Colin Turkington quickly followed, before Scotsman Gordon Shedden slotted his Honda Civic Tourer into fourth.

The quartet were soon bumped down the order, however, when Tordoff produced a 1:23.357s lap time – just over a second slower than the 2013 pole position lap, set by his team-mate Jason Plato. Double champion Plato spent most of this session completing out laps before pitting to further refine the set-up of his MG6. He eventually came to the fore in the final five minutes to set the ninth fastest time before the foggy conditions worsened and the session was cut short.

Ahead of Plato in the times were the trio of Tom Ingram (Toyota), Fabrizio Giovanardi (Ford) and Matt Neal (Honda) in sixth, seventh and eighth respectively. Knockhill race winner Mat Jackson rounded out the top ten.

There were two off-track moments of note involving the Honda Civic of Martin Depper and VW CC of Warren Scott. Depper spun into the gravel at Tarzan, bringing out the red flags with just over ten minutes remaining, whilst Scott went off at turn three and made contact with the wall. Team BMR team manager Mark Turner said, “That’s not really how you want to start a weekend! A part failed on the car and – there was nothing Warren could do about it and it’s just frustrating really. There’s a fair amount of damage to the front end where he’s hit the wall, but I’m confident we’ll get it fixed and ready for the next session. Warren’s absolutely fine – just disappointed to have missed out on valuable track time.”