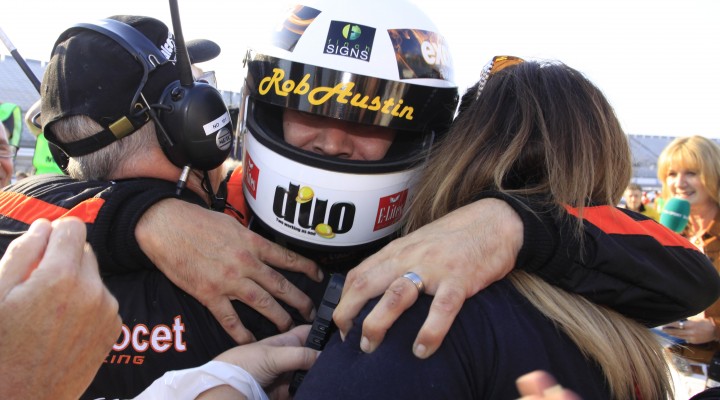 Austin’s Exocet Racing Audi A4 made a blistering start and immediately jumped by pole-sitter Menu before the 31 flame-spitting cars were even halfway towards the infamous turn two hairpin.

From there Austin managed the gap back to Menu’s VW for the entire contest, whilst a huge race-long battle ensued behind for the final place on the podium.

That position went to reigning champion Andrew Jordan who fended off a gaggle of cars for the entire 16-laps. After a typically good getaway for the eBay Motors BMW of Colin Turkington the Ulsterman immediately set about attacking Jordan ahead of him.

Turkington had the Ford Focus of Mat Jackson and Jason Plato’s MG for company, however, and four cars became five when Rob Collard’s BMW joined the battle late on. MG KX Clubcard Fuel Save had shown some heavy tyre wear in race two and the issues seemingly returned with the squad running the Dunlop Sport Maxx soft compound in the finale. Plato was passed late on by Collard and despite several attempts by all five drivers there were no further changes until the finish.

Plato gradually drifted into the clutches of team-mate Sam Tordoff but held on to take seventh. Honda Yuasa Racing’s Matt Neal took a lonely ninth in what has been a relatively low key day for the triple champion. Having relinquished the championship lead at Rockingham in each of the last two seasons it’s fair to say the circuit isn’t Neal’s happiest hunting ground.

Neal’s Honda team-mate Gordon Shedden endured a short and rather miserable final race after his Civic Tourer was damaged beyond repair in a first lap collision with Hunter Abbott and Marc Hynes. The incident has also seriously dented Shedden’s title hopes as the 2012 champion is now 64 points behind standings leader Turkington and nine back from second placed Plato.

The AmD Ford Focus of Dave Newsham took a top ten finish ahead of Tom Ingram’s Speedworks Toyota and the VW of Aron Smith, with the latter setting the fastest lap on his final tour of the race.