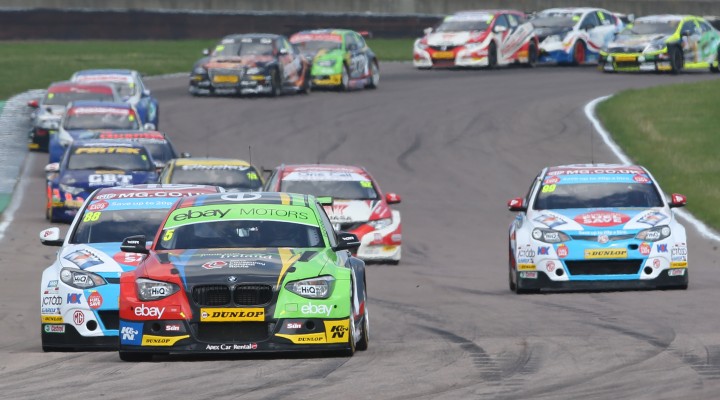 Turkington’s BMW 125i M Sport blasted off the line and away from the rest of the pack on the run down to Deene for the first time. Tordoff was gobbled up by Plato initially and then lost out to the fast starting Chrome Edition Restart Racing VW of Alain Menu. The WIX Racing Mercedes of Adam Morgan nudged Andrew Jordan’s Honda Civic wide while Gordon Shedden’s Tourer skipped across the grass behind.

Tordoff repassed Menu on lap three, who also had the Airwaves Racing Ford Focus of Fabrizio Giovanardi closing in. In a reversal of race one, however, his team-mate Mat Jackson made contact with the rear of the Italian’s Focus as the double champion’s race began to unravel.

Shedden was busy putting in a solid recovery drive after his early off but he couldn’t match the pace being shown by the Exocet Racing Audi A4 of Rob Austin and soft-tyre shod Civic of Jordan. The reigning champion scythed past both Menu and Jackson in the first instance before Austin repeated the trick late on.

When the dust settled it was Turkington who won comfortably from a fading Plato and Tordoff, with the latter having to defend his team-mate as Jordan closed in at an alarming rate. Austin took fifth ahead of Menu with both now starting the reversed grid race three from the front row.

Shedden held on to ninth by just 0.203s from the second eBay Motors BMW of Rob Collard whilst Hunter Abbott produced a sensational driver to claim tenth – his best ever result in the BTCC. Incredibly after problems in qualifying Abbott started race one from 31st on the grid. From there he hauled his Alcosense Breathalysers Racing Audi A4 to 14th, before going to improve by a further four places in the second bout.

Colin Turkington said: “The BMW was really hooked up. In the old days Rockingham was a BMW track and now we’ve established this car here as well. It’s hard to put into words how good the car is. I’m glad I’ve got those points as it’s a nice buffer to have in the championship. We’ve all seen how quickly it can change so I have to be careful in race three.”

Jason Plato said: “I felt the tyres start to go off about four laps from the end so we’ll have to see what happens. It was a bit of comfort having Sam behind me in that one – we’re all out there racing for ourselves but having your team-mate as a rear-gunner takes a bit of the pressure off. To be second in the championship now is great, but it was a tough race, we’re just struggling to make inroads at the moment.”

Sam Tordoff said: “I was very mindful of the situation at the end of the race – I had the pace to get past Jason but he’s fighting for a championship and I’m not. The call came through and I was there to protect the team from Jordan. It was important for us to both be up there and capitalise in the manufacturer standings as the Hondas are further down this weekend.”

The final race from Rockingham will take place at 16:40 with the action being broadcast live on ITV4.