Jackson and Gio clash at Rockingham 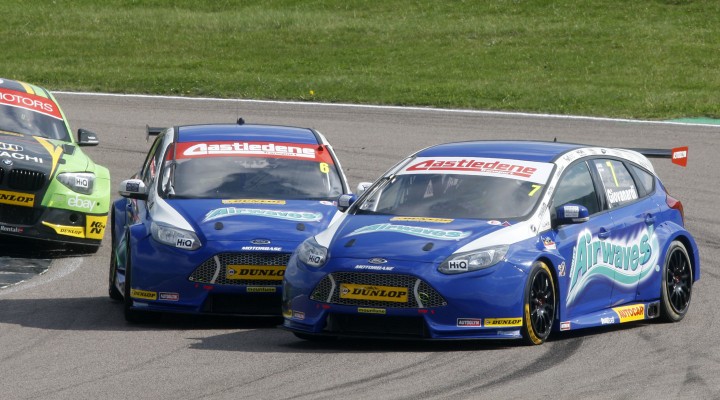 The Motorbase-run Airwaves Racing squad came away from the Rockingham oval circuit in a strong championship position with a lucrative points haul from all three of Sunday’s races, but also provided us with some of the most intense and exciting bumper-to-bumper action.

In the first bout of the day, Knockhill race winner Jackson was hounded by his double-champ team-mate Giovanardi in the early laps, with the pair touching on numerous occasions. The Italian eventually made it through with a bold move around the outside going into the final chicane, and powered to sixth across the line after 18 laps of racing.

Although Jackson dropped back in race one to finish ninth, the #6 driver had the edge when the lights went out for the second time. The two blue machines found themselves nose-to-tail once again, but this time it was Jackson piling on the pressure, and after some more side-by-side action Mat made it through to take seventh.

As Mat charged forward, Fabrizio was embroiled in a battle with Rob Collard as the WSR racer tried to muscle his way past the #7 Focus. The Italian put up a gritty performance but the sustained damage which saw him fall back into 11th to collect five hard fought points.

The weekend’s results see Mat Jackson maintain his second place position in the Independent Drivers’ Standings with the 33 year-old being the only driver to have scored points in every race so far this season.

Look out for highlights of the battling Airwaves cars on the Official BTCC YouTube Channel tomorrow!