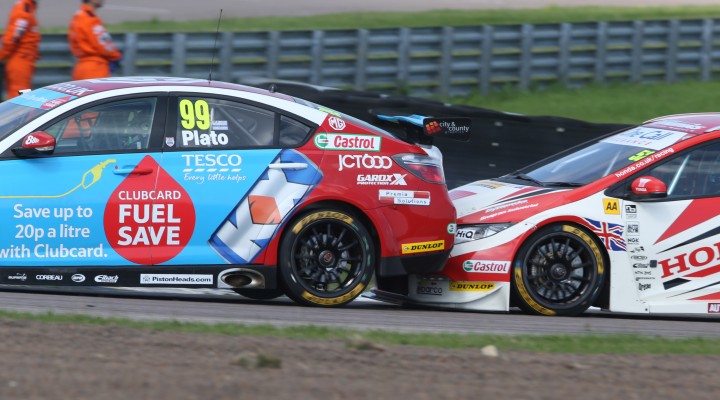 After a season-long struggle in the Manufacturer standings, MG/Triple Eight have gone from a 18-point deficit to a 22-point advantage over Honda/Team Dynamics as the two experienced very different race weekends at Rockingham.

The KX Clubcard Fuel Save-backed MG squad enjoyed its highest points haul of the 2014 season to date, with a maximum possible Manufacturer score with both drivers finishing ahead of their Honda rivals in all three races. Indeed, this is the first time the MG team has achieved such a feat, and only the third time it has happened in the last three seasons.

Sam Tordoff secured his second consecutive pole position with a stellar lap that put him 0.484s ahead of his rivals. Despite not making the top step, Tordoff scored second in race one and third in race two, while his title-contender team-mate Jason Plato scored identical results in races two and one respectively.

By contrast it was a difficult day for the two Honda Yuasa Racing drivers, although in the early running Gordon Shedden especially looked capable of scoring some strong results. With a positive fourth place in qualifying, the 2012 champion was racing Plato for a podium position in the opening encounter, but an attempted pass resulted in a slight touch that sent the Scotsman sliding. He made a great save to keep the Civic Tourer pointing in the right direction, but dropped down the order and with slight damage to his steering ended up eighth at the flag.

Shedden then repeated the result in race two, but following an opening lap clash in the final showdown with Marc Hynes and Hunter Abbott was forced to retire from the running. It was the first time Shedden failed to finish a race in 2014.

Neal, who qualified a bit further back in ninth, also found himself to be the bearer of bad luck on race day. His opening encounter was marred by a fuel flow issue which hampered the Tourer’s performance and left him 17th over the finish line. He spent the next two races battling his way back up the order, getting back into the points in race two with 14th before netting a top ten in the final bout.

While the pendulum has swung in the direction of MG with six races remaining in 2014, Honda will undoubtedly be going all out at Silverstone and Brands Hatch to retain the Manufacturer trophy that it has lifted for the past four consecutive years.