Perfect start for Plato at Silverstone 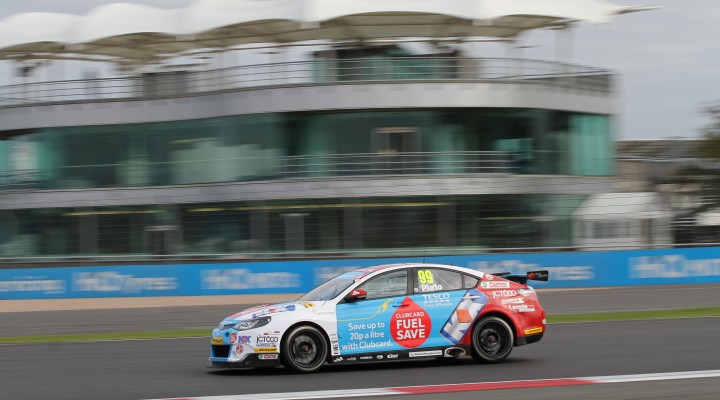 MG KX Clubcard Fuel Save driver Jason Plato has set the fastest time in Free Practice One at Silverstone with a time of 58.614s. The two-time champion, who currently sits second in the 2014 Dunlop MSA British Touring Car Championship standings, just edged out his main championship rivals to go fastest, with Honda Yuasa Racing’s Gordon Shedden 0.081s behind in second and Colin Turkington third for eBay Motors 0.159s in arrears.

Both Plato and Shedden will need to keep Turkington behind them this weekend to stay within touching distance of the BMW driver as the season nears its conclusion. Turkington is, however, feeling confident after the first session of the weekend, and said, “It’s good to be back in the car after a three week break since Rockingham. I’m not feeling too much pressure at the moment – we are at the business end in the times, but so are our main championship rivals so I’m sure it’s going to be a tough weekend.

“We’re trying to approach everything as normal, but I need to limit any risks as much as possible.”

It was Plato’s MG team-mate Sam Tordoff who set the early pace in the dry but overcast Saturday morning session. He was the first driver to drop below the one-minute mark around the short blast of the Silverstone National circuit, but as the times tumbled later on the Yorkshireman dropped down the order slightly to end up sixth.

The Chrome Edition Restart Racing Volkswagen CCs seem well suited to the flat-out nature of Silverstone, and Aron Smith, Alain Menu and Warren Scott were all inside the top ten in fourth, fifth and ninth respectively. Smith was black-flagged with just a couple of minutes remaining for repeatedly exceeding track limits, but the squad will undoubtedly be pleased with its pace out of the box.

A time of 59.048s secured seventh for the WIX Racing Mercedes A Class of Adam Morgan, just ahead of Mat Jackson in the Airwaves Racing Ford Focus, and the final top ten position was sealed by Honda driver Matt Neal in his Civic Tourer.

The only driver not to set a representative time in the session was AlcoSense Breathalysers driver Hunter Abbott. His Audi A4 suffered with alternator problems which prevented him from leaving pit lane.

With the top 20 cars covered by 1.005s, it’s sure to be another weekend of incredibly close racing. Follow all the action on the btcc.net Live Zone where you can find live timing, circuit commentary and live streaming of qualifying and ITV4’s race day coverage.