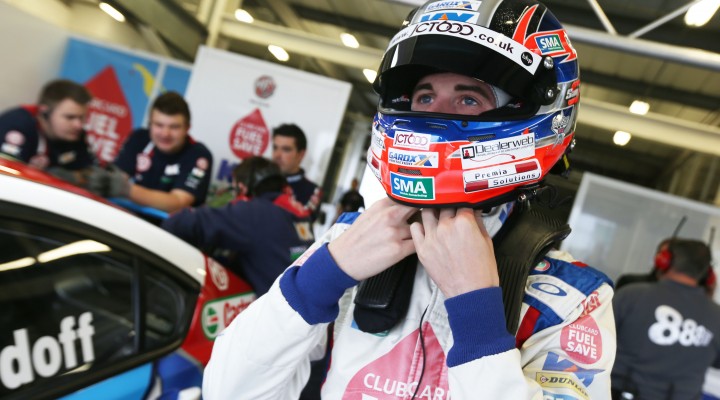 Sam Tordoff has topped the second free practice session for MG KX Clubcard Fuel Save at Silverstone. A fast lap in the final few minutes of the running moved him ahead of MG team-mate Jason Plato who topped the earlier FP1 and had been fastest for much of FP2.

The 25-year-old, who was sixth fastest earlier in the day, is happy with the set-up on his MG6, and said, “We’re pretty much where we need to be in terms of balance – based on previous form we know the car is quick here so we’re confident of being in the hunt. We’ve tried a few things this morning and are pretty happy with the race pace, but for an outright lap time I think we’ll be going back towards our base settings.

“I need to capitalise on the fact that I’m not carrying any ballast on the car – I should be ahead of Jason. The usual suspects will be up there, but the VWs are also looking good.”

The MG6 was the pace-setter for the whole session, with Plato and Tordoff joined by the Quantel Bifold car of Marc Hynes who was running in the top three for much of the 40-minute period. The former single-seater driver took the chequered flag a solid eighth and will be aiming to repeat the performance in qualifying this afternoon.

It was a slow start to the session for Colin Turkington, who was outside the top 20 for the first 15 minutes. He moved up to 10th place at the half-way stage before further improvement with 12minutes left elevated the Ulsterman to third place.

It was another strong showing for the Team BMR VW CCs with Aron Smith repeating his FP1 performance to go fourth fastest. Jack Goff improved his time from the earlier running to go sixth fastest, but there was some misfortune for Warren Scott who went off at Copse and briefly brought out the red flags.

Hunter Abbott has had a difficult morning in his Audi A4, with alternator problems hampering him in FP1 before power steering issues left him down in 28th in FP2. Abbott’s stable mate Rob Austin enjoyed a more successful session, however, posting the tenth fastest time overall.

Qualifying gets underway at 15:45, and Tordoff will be aiming to continue his impressive form and make it three BTCC pole position in a row.