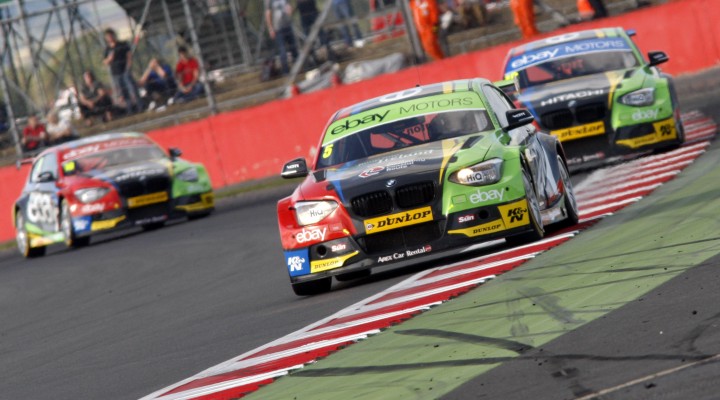 The joy was slightly marred for the eBay Motors-backed squad after Turkington’s team-mate Rob Collard endured a huge high-speed accident in race two, which left the multiple race-winner shaken and dazed but thankfully with no lasting ill-effects.

Arriving at the circuit with a 55-point advantage in the drivers’ standings the characteristics of the 1.64-mile National circuit were expected to suit many of Turkington’s challengers, and although not the ultimate pace-setter the 2009 champion was still able to negate the deficit by claiming second in qualifying – just 0.064s off pole position.

The Ulsterman then led the first two races before having to settle for second place in both contests, with his rival Jason Plato grabbing the lead at Brooklands in both encounters.

“At this stage of the season it was important not to get mixed up in any major contact so we had to settle for second,” said Turkington. “The results in the first two races were fantastic and extremely valuable points for the championship.”

Race three produced one of the greatest BTCC battles in recent memory with Turkington among the enthralling action, which had more than 30,000 fans on their feet. Often running three-wide there were no fewer than five former BTCC champions fighting it out for the final place on the podium. As so often has been the case this season, 32-year-old Turkington managed to narrowly avoid troubles in a quite epic contest.

“I’m not even sure what just happened,” beamed Turkington. “I was actually trying to stay out of trouble but there was cars everywhere and I had to fight. To come away with a podium after that scrap is just sensational and I’m so happy.”

Turkington’s team boss Dick Bennetts was equally delighted with the result, “We hoped we could maybe get one podium at Silverstone but we never expected three. Due to its three long straights we had to use the fantastic handling of the BMWs to make up time in braking and the corners,” he said, after what had been an emotional roller coaster of a weekend.

“Colin produced the goods once again and we couldn’t be happier with his results. Nick performed well too but it was obviously a stressful day for everyone considering Rob’s accident and we’re just delighted he is okay. We can build new cars so that’s not a problem but we can’t get a new Rob! It was a big one but the strength of the WSR designed NGTC BMW 125i M Sport was there for all to see.

“I’d also like to send out a big thank you to the whole TOCA medical crew, the Silverstone marshals & everyone else involved in what was our biggest touring car accident since we entered the BTCC!”   Collard had already been in flying form earlier in the day when he stormed through from 11th on the grid to finish seventh in the opening race. He then ran as high as fifth in the next bout before drama struck the experienced pilot on the penultimate lap.

Contact between two other competitors ahead of him left Jack Clarke’s Ford Focus sliding across the circuit immediately in front of Collard’s BMW.  It was too late for the eBay Motors star to take evasive action and contact sent the BMW barrel rolling heavily in a high-speed accident that lasted almost ten seconds. It was a scary and dramatic incident, which left Collard feeling ‘tender’ but thankfully with no injuries of note.

“I was bracing myself for that initial hit on the roof and my natural instinct then was to just hang on,” Collard notes. “The marshals got to the car very quickly and got me out – they did a great job, as did the entire medical team. It’s a testament to West Surrey Racing and the NGTC rules in the BTCC that these cars are very very safe.

“I’m absolutely ready to get back in the car and I’d race tomorrow if I could but I’m not sure the car will be. If any team can get the car ready for Brands Hatch then it’s WSR but it’ll take a monumental effort from everyone. I’m 100% a team player and I want to be out there to try and help Colin and the team win all four championships.”

Team-mate Nick Foster was able to bring home a point in the final race, as he’d already done in the first contest – helping the squad to secure Independents’ teams honours for the 2014 season.

“It was hard work out there,” enthused Nick. “I felt we did a decent job given the circuit does not necessarily suit our car. I’m just hugely relieved that my buddy Rob is okay though, after his massive crash. The eBay Motors BMW team continues to do a great job building fast and strong cars, and that was evident last weekend. Onwards to the last meeting at Brands Hatch, I’m sure it’ll be an exciting finale to the year!”

The grand finale at Brands Hatch on 11/12 October could see the eBay Motors squad secure an incredible four crowns in the same season.

“We’ll go to Brands Hatch in confident mood and we hope to get the job done,” concluded Turkington. “We said it’d go down to the wire and it’s turned out exactly how we thought it would. We would have taken this incredible position at the start of the season and we’ve put ourselves in the best possible place going into the final event. It’s testament to everyone at the team – now we just need another weekend like this one, apart from Rob’s unfortunate accident!”