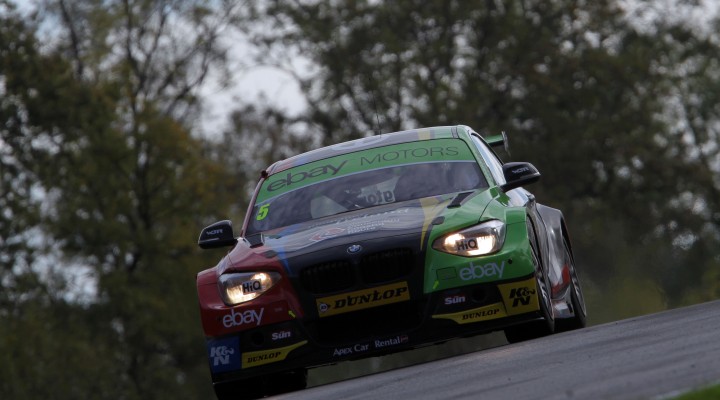 Colin Turkington has edged out championship rival Jason Plato for the second time today after setting the pace in free practice two at Brands Hatch.

The circuit was completely dry for a short period mid-session, where Turkington was able to haul his eBay Motors BMW 125i M Sport around the GP circuit in a time of 1:31.729s – just over half a second off Plato’s 2013 lap record.

The session got underway on a damp but drying circuit and it was Honda Yuasa Racing’s Matt Neal who set the first representative time, with the Japanese marque looking good in mixed conditions.

MG KX Clubcard Fuel Save’s Sam Tordoff punched in a time to go second and was quickly followed by the Hondas of Gordon Shedden and Andrew Jordan in third and fourth respectively.

With grey clouds looming, however, the trio were trumped by Plato’s MG as he set a time just 0.397s shy of Turkington’s benchmark, pushing his team-mate Tordoff down to third.

“That’s where we expected to be really – wet or dry I think we’ll be at the sharp end,” said Sam. “Colin [Turkington] obviously went quite quick at the end there but we didn’t put new tyres on so we’ve probably got a bit more in the tank. Overall I’m very happy – I’d probably prefer it to be dry, I think we’ll have a better shot at pole, but it’s pretty hard to predict. We’ve come in with a good set-up and there aren’t really any compromises we’ve had to make. I just need to concentrate on my own performance, get on the front row this afternoon and hopefully get some wins tomorrow.” Technical issues with the radio system caused a brief delay in proceedings on safety grounds, but when the action restarted the heavens immediately opened.A handful of cars circled in the heavy rain until the finish but predictably were unable to improve on their respective times, although with weather forecasts remaining uncertain for the remainder of the weekend the experience may prove vital in preparation for race day.

Three drivers failed to enjoy any track time, including the Proton of Ollie Jackson. Rob Collard’s newly-built eBay Motors BMW is suffering with engine problems, whilst Tom Ingram also failed to circle after a driveshaft issue.

Click here for the final classification of free practice two. Qualifying for round 28 of the 2014 Dunlop MSA British Touring Car Championship commences 15:35 and will be streamed live on www.itv.com/btcc.