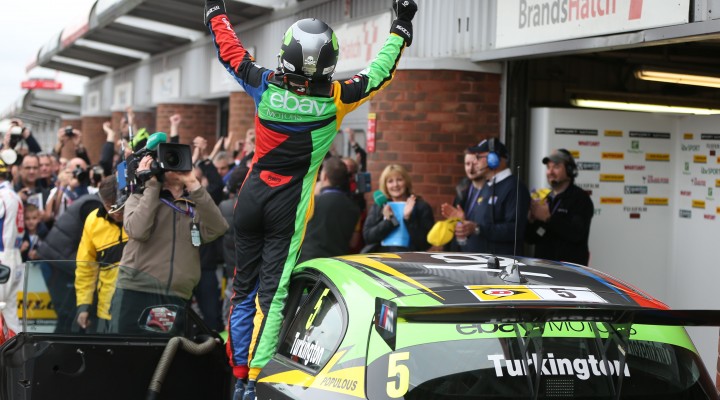 Jason Plato claimed victory in the opening Dunlop MSA British Touring Car Championship race at Brands Hatch, but Colin Turkington is the provisional champion after the Ulsterman secured yet another podium.

It was a pulsating contest that started with a huge multi-car accident, as well as providing three different leaders in the opening half lap.

Pole-sitter Plato was jumped off the line by his MG KX Clubcard Fuel Save team-mate Sam Tordoff, who then immediately had the eBay Motors BMW of Turkington blasting around the outside of him going into Paddock Hill Bend for the first time.

Mayhem broke out immediately behind after a coming together between the Airwaves Racing Ford Focus of Fabrizio Giovanardi and Gordon Shedden’s Honda sparked a sequence of incidents in the pack. Shedden’s Tourer slid sideways across the track and was hit heavily by the Audi A4 of Rob Austin. Dave Newsham’s AmD Ford Focus then jinked right leaving Team BMR Restart’s Jack Goff with nowhere to go. The young talent was also hit from behind by team-mate Alain Menu and Goff’s VW became airborne. Matt Neal and Hunter Abbott were also collected with the former being flown to hospital for a precautionary X-ray on his ribs. Neal’s participation in the remainder of the event is currently unknown.

When the dust settled it was Tordoff leading from Plato and Turkington, with WIX Racing’s Adam Morgan fending off the Ford of Mat Jackson. The Airwaves Racing star didn’t wait long, however, nipping by the Mercedes A Class at Druids on lap five.

Meanwhile Rob Collard was producing a staggering rise from 23rd on the grid and was up to seventh by the sixth tour after he passed the impressive James Cole in his United Autosports Toyota.

Jackson was all over Turkington in the fight for third and the two cars touched as they ran towards the start/finish line on lap seven. Both emerged unscathed from the marginal incident but the same could not be said for Warren Scott’s VW after he endured a high-speed off into the barrier following contact with Nick Foster’s BMW in a separate clash.

A further safety car period followed to remove Scott’s stricken machine and at the restart there was still time for Collard to secure a top six finish after a hugely impressive pass by Giovanardi’s Ford. The pair ran side-by-side through Hawthorns before the BMW driver completed the move through Westfield.

There was further contact between Mark Hynes’ MG and the Toyota Avensis of Luke Hines, which also ended Cole’s race, but all eyes were on the front as Plato led from Tordoff after being earlier let through by his team-mate.

The MG squad had done enough to secure a one-two, further aiding its challenge to win the Manufacturers’ title, but it wasn’t enough to hold off Turkington in the Drivers’ championship battle. 32-year-old Turkington eventually cruised home in third and although he needed convincing on the team radio that he had scored enough points, his eBay Motors squad were ready in the pitlane to begin the celebrations!

“I am over the moon,” said the provisional champion. “I suppose the main feeling is relief. We were ready to do battle until race three so I really wasn’t expecting to clinch the title so early in the day. I actually thought I was a point short when I crossed the line so I didn’t want to celebrate until I was absolutely sure.

“To be able to celebrate with the team and my family is a really proud moment. Lewis [Colin’s son] wasn’t old enough to remember the first one and part of the reason of getting back into the BTCC was to do it for him, so I’m delighted.”