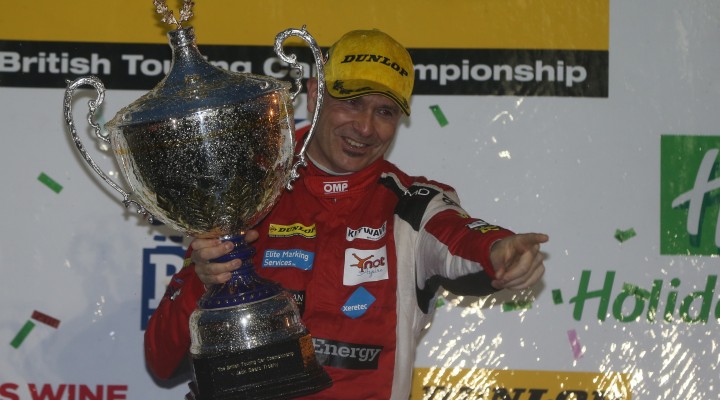 The AmDTuning.com team was able to come away the final rounds of the Dunlop MSA British Touring Car Championship season with a title to its name after securing the Jack Sears Trophy on Finals Day at Brands Hatch.

The West Thurrock-based team headed into its home event as one of those still firmly in contention for the trophy, being handed out this season to the Independent driver to make up the most positions during the 30 races held over the course of the year.

Improvements made to the team’s Ford Focus saw Inverness-racer Dave Newsham on the pace from the outset when the on-track action got underway and he produced his best qualifying performance of the year to snare tenth place on the grid, despite his session ending early when he slid off into the gravel at Sheene.

Unfortunately, Dave’s chances of a strong result in the opening race would be brought to a premature end when he was one of the innocent parties to be caught up in an incident at turn one, which damaged his Focus and forced him to return to the pits.

Although the team would get him back on track, Dave would ultimately be forced to bring the car back into the pits to retire, leaving him 25th on the grid for race two.

Doing what he could with a car not performing at its best, Dave worked his way up to 17th place in the second race, which meant he went into the season finale having moved to the head of the Jack Sears Trophy standings.

With the team in the pits keeping him up to speed on what was required to secure the crown, Dave produced a solid drive in race three – held in atrocious wet conditions – to take the flag in twelfth spot, enough to secure the Jack Sears Trophy by six ‘positions’.

“It’s great for us to end the season with a trophy,” he said. “This weekend has been a challenge but the team gave me a great car. On Saturday, it was the best it has been all season but unfortunately the incident in race one meant we couldn’t show it. For race two, it wasn’t perfect and I did what I could, which meant we were in the best position in the Jack Sears Trophy going into race three.

“The team was keeping me up to speed on what we needed to do, so I made sure that I kept the car on track and didn’t do anything silly to secure the trophy.

“The fact we have won a trophy that is awarded for making up places shows that we have had a strong race car all season. Our real strength has been the speed we’ve shown on race days, and if I’m back with the team in 2015, what we need to do next year is to qualify higher up the order to really mix it towards the front on a more regular basis.

“Overall, it’s been a learning year for both the team and myself but I think we can be happy. We’ve tried a lot of things with the car and have done a lot of testing in the public eye, which isn’t ideal, but to come away from the season having shown our speed, with a podium finish at Knockhill, and with a trophy to our name is great.”

Team boss Shaun Hollamby was also pleased to end the year with some silverware, with focus now turning towards the team’s planned expansion for what looks set to be an exciting 2015 campaign.

“We had some good pace in the car this weekend and the fact we then got caught up in another drivers accident in race one is almost the story of our year in a way,” he said. “However, we fought back from it, and to end the season with the Jack Sears Trophy is just reward for the work the boys have put in all year.

“They’ve done a fantastic job to give Dave a car that has been reliable all year, and we’ve also got to thank the guys at Motorbase for providing us with a good package in the first place. The fact we have been able to take a podium finish this year and have been able to put in some strong performances in such a tough series is also a great example of why the current regulations work so well.

“Dave has been great to work with this season and it would be good for us to continue together in 2015 but we’ll have to sit down and talk over the winter and see what happens for next year.”

The new JST champion won’t be taking it easy anytime soon, however, as he’ll be making a quick return to action this weekend when he takes part in the annual Rallycross Grand Prix event at Croft.

Dave will will be making his first Rallycross outing during the event, which will see him take to the track at the wheel of a Citroen Saxo prepared and run by the Xtreme Motorsport team.

“Being a touring car driver, I can’t say that all my driving is on tarmac!” he said. “We always try to make the circuit as short as possible, and sometimes that means going off track a little!

“I’ve always been a fan of Rallycross and used to watch it on Grandstand when I was younger. I’ve always been keen to try as many different disciplines as I can in my career, so thanks to the team for giving me the chance to give it a go. They contacted me earlier in the year and asked if I would be interested, and it didn’t take me long to accept the offer.

“I cut my teeth in schoolboy grass track on bikes and progressed to speedway, so I have a good feel for loose surfaces, and I have always been good in the wet in cars too. I would think I should go well in Rallycross but I have never done it before, and with no experience, it is a big challenge for me to just turn up and race against seasoned campaigners.

“As with any driver however, I’ll be going all out to win…”