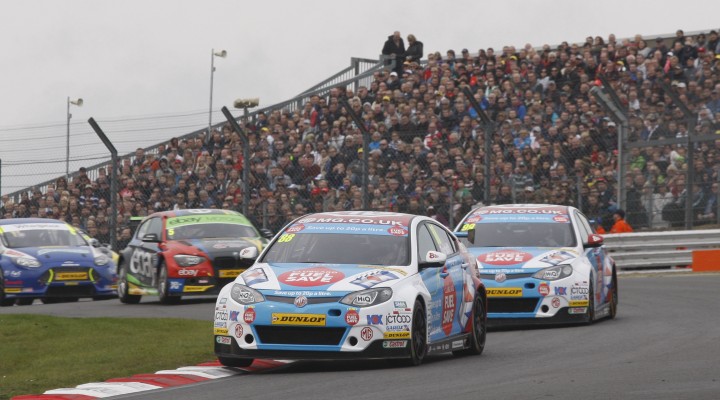 The final round of the 2014 Dunlop MSA British Touring Car Championship delivered three enticing encounters, and the MG KX Clubcard Fuel Save team secured a 1-2 finish in the first race that enabled the Greatworth-based squad to scoop the prized Manufacturer’s/Constructor’s title for MG, confirmed by double points scores in the remaining two races.

Winning the Manufacturer’s/Constructor’s title is the highlight of the three-year relationship between 23 BTCC Champions Triple Eight and resurgent British car manufacturer, MG, which has seen the combination take an impressive 22 victories, 54 podiums, 16 pole-positions, and eighteen fastest laps.

After a strong qualifying 1-2 the day before, Jason Plato and Sam Tordoff duly converted their one-lap pace into an important race 1-2, their third of 2014, but it wasn’t to be plain-sailing. After heavy rain overnight, Plato was bogged down on the greasy side of the track and it was team-mate Tordoff and Championship rival Colin Turkington who powered past into Paddock Hill Bend for the first time. Plato’s MG got the better of the BMW before the lap was over and the first of several safety car periods bunched up the pack.

MG’s rivals Honda were amongst the cars involved in the first corner fracas that prompted the deployment of the safety car; both factory-supported Civic Tourers retired in unrelated incidents at Paddock Hill Bend. Matt Neal was taken to hospital for precautionary x-rays and wouldn’t play a part in the final two races.

On the eighth lap of race one Tordoff complied with the team’s request to let a pacey Plato through, an effort that would prove somewhat in vain once Turkington fended off the challenge of Mat Jackson and established himself in the required third place, with the point for the fastest lap of the race cementing the BMW driver’s Championship win.

Following the double DNF for the Hondas and news spreading of Neal sitting out the remaining two races, it became apparent that potential penalties aside, Triple Eight and MG had actually sealed the Manufacturer’s/Constructor’s title before the start of the second race.

While overcast conditions threatened rain, the second race of the day played out in dry conditions, as both Plato and Tordoff set off from their front-row starts in rapid fashion.

Another first lap incident required a safety car and one lap after the restart Plato tried to pass Turkington up the inside into Paddock Hill Bend. The BMW made contact the MG KX Clubcard Fuel Save car as the pair approached the apex of the corner, sending the new Champion into the barriers, immediately ending his race.

Multiple race winner Mat Jackson sneaked ahead of Plato and into the race lead, before losing control of his Ford at Hawthorns and exiting the race handing the lead back to the #99 MG. Turkington’s team-mate Rob Collard seized the opportunity to pass Plato after Jackson’s off, before Adam Morgan did similar a few laps later. When Morgan forced his Mercedes up the inside of the BMW for the race lead at turn one, Plato followed, and re-took second place. Morgan’s lead was short-lived however, and the WIX Racing driver careered off track at Sheene, re-joining in second place.

Plato benefited from his rival’s unforced error and duly took the flag for his second win of the day, leading home Morgan and Tordoff. The Yorkshireman delivered yet another steely drive after putting in a good defensive display from a feisty Andrew Jordan, before battling past Collard to take third.

Shortly before race three, Plato was banished to the back of the grid and given three penalty points for the incident in the previous race with the newly-crowned BTCC Champion. Due to it being Plato’s third ‘strike’ of the year, a ten-place grid drop was extended to the last place on the 28-car grid. A further protest from Turkington’s West Surrey Racing team saw Plato given a 20-second time penalty, which dropped the #99 MG to thirteenth place and promoted Tordoff to second, for his third double-podium weekend of 2014.

Ahead of the third race of the day and the final race of the 2014 BTCC season, the heavens erupted and a mighty downpour washed over the 2.43 mile GP circuit as darkness also set in. Plato elected to start from the pit lane and avoid a potential grid-incident, while Tordoff started from ninth.

Following yet another first lap crash, the safety car was deployed and gave the MG duo a chance to assess the conditions at a more sedate pace; Sam was ninth and Jason 22nd. The treacherous conditions and low light levelled the field and the BMWs were not as omni-present as in previous races, with the MGs scything up the order. By lap nine Sam was fourth and Jason was inside the top ten in tenth place, having stuck a move on the new BTCC Champion that caused him to celebrate on the team radio. In the final laps Plato passed Morgan, Nick Foster, and Tom Ingram to finish seventh, with Tordoff taking the flag in fourth after a combative drive with Jackson.

The final weekend of the 2014 season sees Plato finish second in the championship 35 points adrift of Turkington and 50 clear of Honda’s Gordon Shedden. Tordoff improved to seventh overall in the standings, 22 off Collard and 48 ahead of Neal. MG / Triple Eight finished 95 points ahead of Honda / Team Dynamics to take the Manufacturer’s / Constructor’s title. In the HiQ Teams Championship, MG KX Clubcard Fuel Save secured second with 643 points.

Guy Jones, Sales and Marketing Director, MG:
“It’s a hugely proud and exciting day for the MG brand to win the 2014 BTCC Manufacturer’s title. It’s a great day for the brand and our fans, to see MG where it should be, at the top of a premium motorsport series. We’re delighted with the programme so far, especially given the short time that Triple Eight had to get the car ready for the grid in 2012; I think it was beyond everyone’s expectations to win a race on our first weekend with the MG6, and that’s testimony to Ian Harrison and the team at Triple Eight. With a brand name like MG that is synonymous with motorsport, we wanted to pitch up on day one and be competitive. Obviously the goal over the three years was to win some silverware, so it’s a dream come true today to win a Championship trophy, and be part of a winning team. For us we needed to put the MG brand back on the map, so we had to raise awareness that the brand was back. Despite a rich heritage of motorsport success, it was all in the past, so we had to do something with a modern era car. The beauty of the BTCC for us is two-fold; it’s television-led media coverage, the car you see on track is very similar to the car we sell in a showroom. The spirit of the car you buy is there on TV, racing in front of millions, and then you have around 40,000 fans per event that we can interact with and show the car to in the bare metal. It’s really helped build the brand back up and beating a notable brand and prestigious team like Honda Team Dynamics who been here for a long time before us, it’s an amazing result and where MG should be.”

Jason Plato, driver #99:
“What a finale weekend! Nail-biting and exciting for all, especially the fans. It’s a fantastic result, I’m dead chuffed, and it’s been a great effort from Triple Eight and MG. Just reward for three years hard work? I think so. As a team, we’ve done a brilliant job. To come from not having a shell six weeks before the first race in 2012 to where we are last year and this year, we’ve been the dominant force and, if you take Colin out of the equation, I was fifty points in the lead going into the last weekend, and that should have been the case last year. Let’s all come back next year with a level-playing field and see who is where.”

Sam Tordoff, driver #88
“It’s been a good day. We got the job done with regard to the manufacturer’s title; I had some good results personally and obviously did what I had to do in race one. All in all three great results and I’ve very happy with the end of the season. We’ve been really quick this year, and had a win and two pole-positions, but suffered reliability issues that have hampered our opportunity to get more results and success. In that respect it hasn’t been ideal because my title aspirations haven’t been fulfilled, but I’ve learnt a hell of a lot and I know I have the pace to run at the front regularly.”