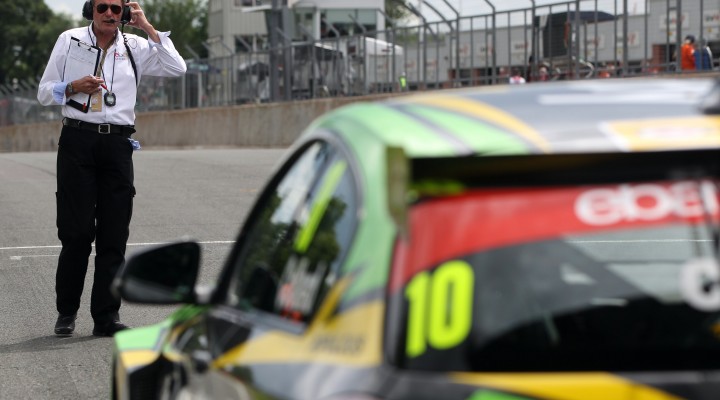 West Surrey Racing boss Dick Bennetts has hailed his own multi championship-winning squad while warning their rivals that they’ll be out to defend their titles in 2015.

Colin Turkington became drivers’ champion for the second time in his impressive career, to add to the Independents’ title, whilst the eBay Motors-backed squad also claimed both teams’ trophies.

Arriving at the legendary Kent circuit with a 50-point advantage Turkington qualified his BMW 125i M Sport in fourth position around the 2.43-mile Grand Prix layout.

He immediately tussled for the lead as the opening contest got underway, flying past championship rival Jason Plato before challenging his MG team-mate Sam Tordoff around the outside of Paddock Hill Bend.

Deciding that discretion was the better part of valour the Northern Irish driver eventually settled into third position, where he could keep a close eye on Plato ahead.

With the team and officials frantically doing their sums it became clear as the race wore on that a podium and the fastest lap would be enough to secure the title. Colin duly clocked the quickest tour to earn the all-important bonus point and the championship was his, much to the delight of his family, friends, supporters and the entire eBay Motors team.

“I am so proud of Colin and everyone at the team,” said Bennetts. “This represents weeks, months and years of hard work, particularly when you consider how we only prepared these BMWs on the eve of the 2013 season. The cars are unrecognisable from that time, as we’ve developed them into race-winning and now championship-winning machines.

“Colin is a world class touring car driver and I had the utmost faith that he would get the job done here this weekend. He deserves all the credit, as do both Rob [Collard] and Nick [Foster] for helping us win the teams titles. I would also like to thank eBay Motors, BMW and our other partners for their magnificent support.

“It’s time to celebrate now but the hard work will begin in earnest soon enough as we look to come back and defend our championships in 2015.”

As the dust settled on his success, new champ Turkington echoed the sentiments. “I am over the moon,” said the 32-year-old. “The team has done an unbelievable job and I am so grateful to everyone involved at eBay Motors – these championships belong to the whole West Surrey Racing family.”