SUPERMAN PERFORMANCE FROM CLARKE IN KENT 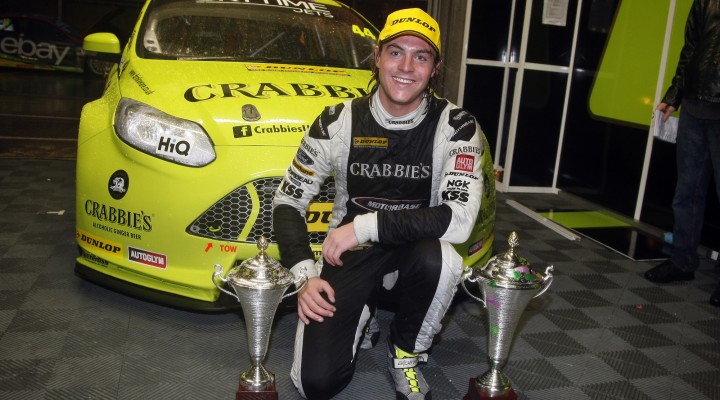 Britain’s premier motor racing series retuned to Brands Hatch, the scene of Clarke’s tin-top debut at the start of the season back in March. This time, the touring car series was to use the iconic Grand Prix layout, which is a favourite amongst drivers and spectators alike and where he has tasted significant previous success, including victory in the FIA Formula Two Championship in 2011.

For qualifying, the Effingham-based driver had the car dialed in to his liking, and as the track dried he was able to push on for a good result at the former Formula One venue. A late red flag whilst he was on his quickest lap left Clarke 20th on the timesheets.

Overnight rain added an extra ingredient into the mix for the first race of the day at the Fawkham venue. As the lights went out, the first corner saw a multi-car incident on the damp track. Clarke  threaded his way through the incident, making it out onto the other side of the first lap and eventually taking the final points-scoring place in 15th at the chequered flag.

The second race of the day was to be a stop-start affair with two safety car periods.  Jack enjoyed many a battle throughout the race on the cusp of the top ten. As the tyres on the Ford came into their optimum operating window, Jack was able to take 11th and highest-placed Focus as the flag dropped. A penalty for Jason Plato elevated the BTCC rookie into tenth and pole position for the final race of the day after the reverse grid draw.

Clarke made a good start but couldn’t quite hold off the fast-starting eBay Motors car of Nick Foster alongside him on the grid.  However, a safety car period backed Foster into Clarke, enabling the Crabbie’s driver to hustle the BMW driver on the re-start. Once the safety car pulled in, the pressure got to Foster as he drifted wide at Graham Hill Bend allowing Jack to take a tighter line on the exit to snatch the lead.

Jack’s BTCC education was to be put to practice at the end-of-year test as he had 2012 BTCC Champion Gordon Shedden hot on his heels. He managed to hold him off for a brief period but the former title-winner found a way past at Dingle Dell in the closing stages of the race.

As the chequered flag dropped, Jack emerged down the home straight in a fine second place and the highest-placed Independent driver after a hard-fought final encounter of the 2014 season, making him one of only 14 drivers to lead a lap throughout the campaign and the only rookie this season to clinch a podium finish.

Jack reflected on his success at Brands Hatch and his first year in the BTCC:
“It was a great feeling to bring the car to the front of the grid, and line up on pole for the final race of the season. I had to make the most of the position as the car was great, I felt confident and we just hit our marks every time. I think we were more consistent than the guys behind us. Gordon [Shedden] was on fire and we couldn’t catch him so second place is the best we could have come away with.

“I am over the moon to end our rookie year with second. It’s just awesome! It is great to go into the off-season with this result as we look to gain further support for next year’s campaign. We saved the best ‘til last!

“The season as a whole has been one big learning curve with a great result at the end. I didn’t appreciate the challenge to begin with but I took it step by step and worked at all the variables to improve as a driver. The team [Motorbase Performance] have been fantastic, as they helped me develop into a touring car driver this season. You couldn’t script the story for our season this year and for Crabbie’s Racing to have some silverware at the end of the year is the icing on the cake.”