Ingram and Speedworks save the best until last 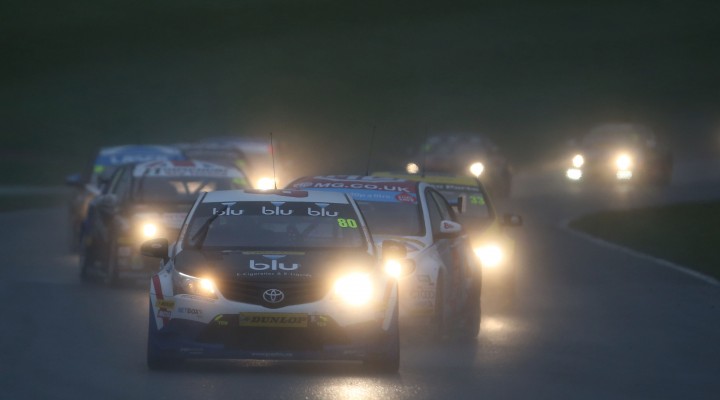 Tom Ingram saved the best until last in his maiden campaign in the Dunlop MSA British Touring Car Championship, tallying a fifth-place finish in the Brands Hatch finale as he conquered changeable weather conditions to annex a top ten points-scoring hat-trick.

Ingram travelled to Brands’ legendary GP circuit determined to bounce back from a torrid weekend at Silverstone a fortnight earlier. In Northamptonshire, an excellent seventh spot on the starting grid and the second-fastest lap time in race one had ultimately come to nought as he was left empty-handed for the first time during what has been an impressive rookie season.

That dark cloud looked to have pursued the talented young High Wycombe ace to Brands Hatch, when mechanical gremlins in the second free practice session cost him valuable set-up time and put him immediately on the back foot. Undeterred, on a damp-but-drying track surface in qualifying, he placed his Hughes-backed, Speedworks Motorsport-run Toyota Avensis 11th on the grid amongst the 30 high-calibre contenders.

A dramatic start to the opening encounter saw a multi-car mêlée at the first corner, forcing Ingram to dart across the grass in avoidance. Following a safety car period to clear up the debris, the blu and Hansford Sensors-supported KX Akademy graduate made short work of scything his way past Nick Foster and James Cole to move up to eighth. Thereafter, he hassled Fabrizio Giovanardi right the way to the chequered flag to cement a welcome and long-overdue return to the top ten.

In race two, Ingram wasted no time at all in despatching Giovanardi into Druids on lap one, before focussing on consolidating sixth position under increasing pressure from Foster and a charging Árón Smith. Over the closing stages, the latter’s Volkswagen CC crawled all over the back of the #80 car as the threat intensified, but to his immense credit, Ingram steadfastly refused to yield – and fifth spot following a subsequent penalty ahead was his reward.

The third outing took place on a sodden track, with heavy rain sending up rooster-tails of spray. Despite having little experience of such conditions in the BTCC, Ingram engaged in entertaining duels with freshly-crowned champion Colin Turkington, two-time title-holder Jason Plato and race two-winner Adam Morgan, ultimately getting the better of the Mercedes on the penultimate lap to secure ninth.

Not only did the result complete a hat-trick of top ten finishes – taking his total for the campaign to an impressive 13 – it also represented his highest-scoring weekend to-date. That enabled the three-time Ginetta Champion and erstwhile British Karting Champion to leapfrog hometown rival Jack Goff into 14th in the final standings – also claiming the accolade of best-placed rookie in the process.

“We’d had a couple of tough weekends at Rockingham and Silverstone, so I was really keen to get back on-track at Brands Hatch and close the season out on a high with three solid top tens,” mused Ingram – at just 21, the second-youngest driver in the field. “Missing the whole of FP2 was obviously far from ideal, but I was happy enough with 11th in qualifying – the conditions were so changeable and although I felt like we had the speed to be inside the top ten, it would also have been all-too-easy to wind up much further down the order.

“Everybody concertina-d up into the first corner at the beginning of race one and I had to take to the grass on the inside of Paddock Hill Bend to avoid it; fortunately that paid off and we emerged without any real damage and still in a decent position. I then managed to pass both Foster and Cole on the same lap before the safety car re-appeared, and after that I was chasing Giovanardi for seventh, but it was a bit of a cat-and-mouse situation because I would catch him over one half of the lap and he would pull away again over the other half.

“Race two was another lively affair and we had some fun battles. We struggled a bit for outright pace, but I was controlling the gap back to Foster behind and was given a bit of breathing space when he began fighting with Smith. When I saw that Árón had got past Nick, though, I knew I had a tougher job on my hands. Over the last couple of laps, he got alongside me on several occasions and I had to defend as if my life depended on it! I was over-the-moon to finish fifth – especially as I had to work so hard to hang onto it.

“The rain was torrential in race three – there was so much spray being kicked up that you could barely even see where you were going most of the time! Some of it was quite literally just guesswork. I was relieved simply to get to the end, in truth, and sneaking past Morgan for ninth on the penultimate lap was a bonus and meant we achieved our pre-weekend target. The Speedworks guys are a fantastic bunch and have all put in so much effort throughout, so it was really satisfying to repay that with such a strong performance.

“This whole season has been a big learning curve for me, not least from the point-of-view of adapting to a front wheel-drive car and settling into life in the BTCC. It’s been a rollercoaster ride at times, but we’ve ended on a positive note and hopefully we can carry this momentum forward now as we look to even more success in 2015.”