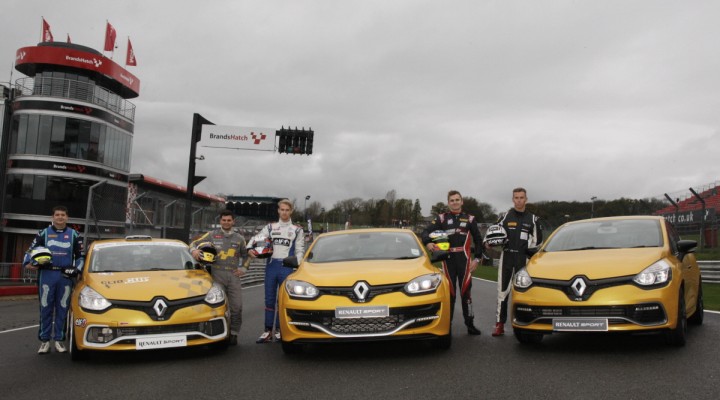 Stars of the Dunlop MSA British Touring Car Championship and a number of well known sportscar drivers teamed-up with Renault UK at Brands Hatch yesterday (3 November), to put the latest Renaultsport roadcar and racecar products through their paces.

Jackson, one of the most successful drivers currently competing in the BTCC, cut his teeth in the Renault UK Clio Cup back in 2000 and says the latest fourth generation racing Clio, powered by a 1.6-litre turbo-charged engine, is closer than ever to touring cars.

“It was a great day, thoroughly enjoyable,” commented Jackson. “The comparison between the road Clio and the race car was incredible, there’s a lot of stuff carried over in the DNA and both cars really are a lot of fun to drive and have very good performance.

“The race car has moved on massively since I was in Clios, it’s a huge step forward – especially the technology – and clearly produces great racing, the close action obviously replicates the sort of thing you find in touring cars. The Clio Cup is a fantastic package and it was undoubtedly a key stepping stone for me on the way to the BTCC, it’s even closer to touring cars now with the new car.”

Fellow ‘tin top’ ace Aron Smith was in agreement, “We had such a laugh today – fantastic fun,” he said.  “The latest Clio is most definitely a step closer to the BTCC than the car I raced a few years ago, the paddle-shift gears, the turbo, everything is nearer to touring car and GT racing.”