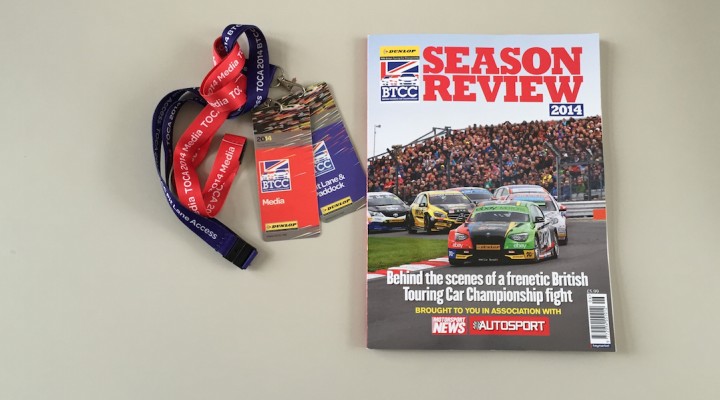 The Dunlop MSA British Touring Car Championship’s media partner Haymarket Publishing has released its 2014 Season Review – the first time in more than a decade that a BTCC  yearbook has been produced.

The 132-page special issue has been edited by Motorsport News’s BTCC reporter Matt James and contains a full look back at the doorhandle-to-doorhandle spectacle that was played out across 30 rounds up and down the country.

As well as that, there is profile of each of the teams, going behind the scenes to uncover the stories that helped each of them battle it out over the ten meetings.

There is an interview with the champion, Colin Turkington, and a look at his march to the prestigious title. Also included is Matt James’ and Autosport’s Kevin Turner’s top ten drivers of the year with full statistical analysis.

The best pictures of the season are provided by Jakob Ebrey Photography, and the publication reviews all of the British touring Car Championship’s support card, including the Porsche Carrera Cup GB, the British Formula Ford Championship, the Ginetta GT4 and Junior categories and the Renault Clio Cup UK.

The magazine is on sale now for £5.99 in WH Smith, Tesco and Sainsbury’s as well as all good news outlets throughout the country, and it will be available for several weeks.

Matt James said: “It was an obvious choice to reintroduce the BTCC Season Review, given the ever-increasing interest in the category and the ultra-competitive season that was played out in 2014.

“Haymarket’s journalists have had unrivalled access to the main players throughout the season and the plot line of the title battle makes this an intriguing read. Even the most ardent British Touring Car Championship fan will learn new things from this Season Review, and the category is something we are very proud to be associated with.”