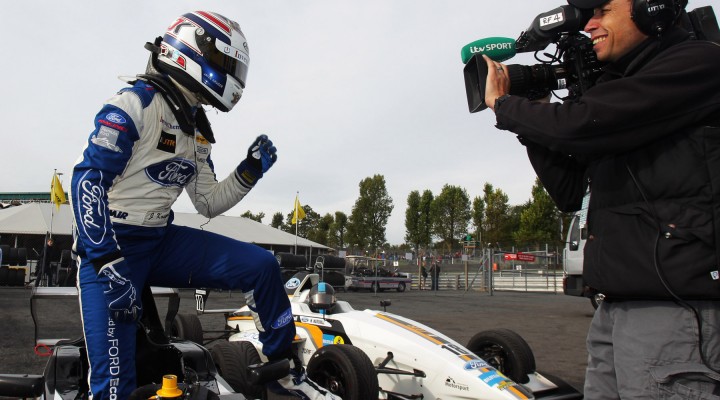 Over the next few weeks here at btcc.net we’ll be taking a brief look back at each of the support series’ on the TOCA bill whilst pointing you in the right direction for the latest news and opinion ahead of the 2015 season. Today we look at the 2014 Dunlop MSA Formula Ford Championship of Great Britain…

After 30 closely fought races just six points separated the top two drivers in Formula Ford, with the season’s most prolific race winner, Jayde Kruger, claiming the crown in the final round at Brands Hatch. However, Kruger’s title win remains provisional pending the outcome of an appeal to the MSA by Falcon Motorsport on behalf of Harrison Scott, the driver with whom Jayde came together in a controversial penultimate-round clash. Kruger won 13 times for the JTR team, the power behind Dan Cammish’s 24-victory title run in 2013, compared with Scott’s five wins for Falcon.

Whatever the outcome of Falcon’s appeal to the MSA, Scott can end the year with the satisfaction of having completed a good season with two wins at Brands Hatch. In all, Harrison visited the podium a brilliant 24 times in the 28 races he finished. Little wonder that he has been selected as one of the six young-driver finalists in the prestigious McLaren Autosport BRDC Award.

Four drivers battled over third in the championship all the way to the final corner of the last race, with Ashley Sutton claiming the honour to add to the Scholarship class title he wrapped up at Silverstone in September. Ashley hopes to return with Ford EcoBoost power and the MBM Motorsport team in 2015 to contest MSA Formula.