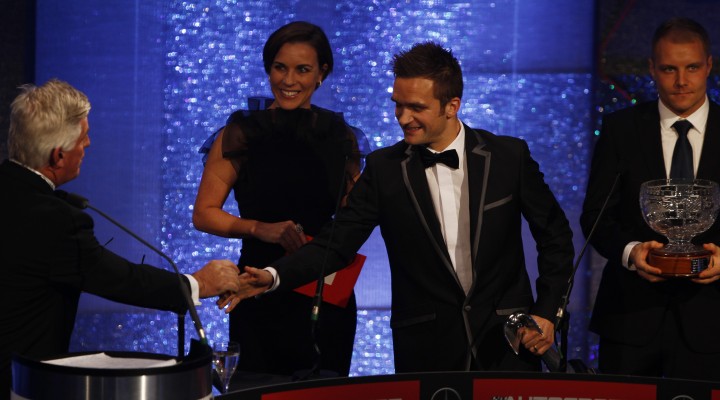 The Northern Irishman was in imperious form in 2014 as he proved to be a class apart in his eBay Motors BMW, scoring no fewer than eight triumphs en route to his second tin-top crown.

Turkington’s points tally ultimately meant he was the most dominant BTCC champion since Fabrizio Giovanardi in 2008.

He finished on the podium at least once at every race meeting and he eventually edged out rival Jason Plato by 35 points.

The 32-year-old received his award from the Deputy Team Principal of the Williams Formula One racing team, Claire Williams, and one of the squad’s drivers, Valtteri Bottas. The West Surrey Racing driver became the sixth successive BTCC racer to receive the accolade, underlining the series’ position as the UK’s leading championship.

Speaking at the glittering event, held at London’s Grosvenor House Hotel, Colin said: “The BTCC is never straightforward. It invariably goes down to the final weekend, and with seven champions on the grid this year, it was tougher than ever.

“I need to pay special thanks to my team – West Surrey Racing – for giving me an incredible car in the BMW and letting me do my thing. Hopefully I can return next year with the No.1 on the side of it.”

Colin wasn’t the only star celebrating on the evening as Formula 1 World Champion Lewis Hamilton received rapturous applause when he was announced as International Racing Driver of the Year. Fellow champions Petter Solberg and Sébastien Ogier were amongst many others were similarly recognised for their outstanding success, whilst 16-year-old George Russell won the coveted McLaren Autosport BRDC Award.