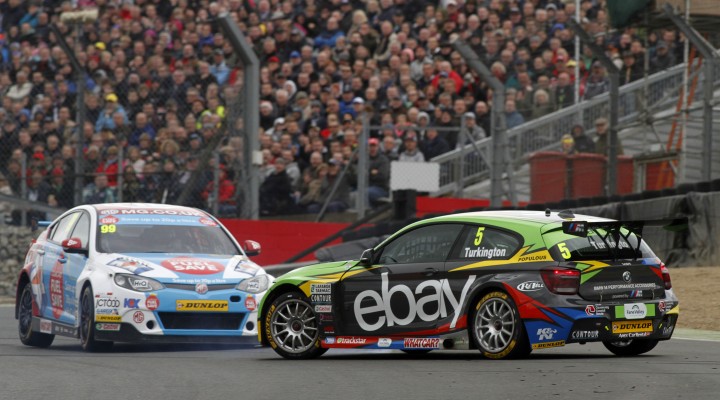 As the 2014 Dunlop MSA British Touring Car Championship reached its climax there were just two drivers left standing in contention for the crown. Colin Turkington had led the way in the points tally since Oulton Park in June, and the only challenger to his second BTCC title was Jason Plato.

Having been in contention for championship glory going into the finale for the past nine consecutive seasons, regardless of the odds it’s never safe to bet against the most successful race winner in BTCC history. Plato also has the most wins of any driver at both Silverstone and Brands Hatch GP, while Turkington had never won at either venue – it was game on.

The penultimate event at Silverstone marked the end of Turkington’s championship challenge in 2013, as a first corner incident left the Ulsterman with broken rear suspension and all but out of the fierce title fight. By contrast, Silverstone has long been a successful circuit for the MG driver, who took double wins at the iconic venue in 2012 and 2013.

True to form it was another stellar weekend for Plato in 2014, with pole position and a third consecutive double victory ensuring that the title race would go to the Brands Hatch finale two weeks later.

Turkington’s advantage was 50 points as the BTCC paddock formed up for the final time in 2014 – it would take a disastrous weekend for the 2009 champion it not to be his name on the famous trophy again.

Plato gave himself the best possible chance to capitalise on any potential drama for the BMW man by planting his MG on pole position ahead of team-mate Sam Tordoff. Turkington took fourth on the grid, but despite needing only to score a handful of points across the three races to secure victory, he was still in full attack mode.

As the cars rocketed off the line Turkington leapfrogged the Honda Civic Tourer of Gordon Shedden that had started third, and found himself three abreast alongside the two MGs going into the fearsome Paddock Hill Bend. With discretion perhaps the better part of valour, the Ulsterman realised that he would soon run out of road and opted to slot in behind the two Triple8-run cars. Third position was, after all, all he’d need to move out of reach in the standings were Plato to win.

It was Tordoff who emerged in the lead after the first lap shuffle, however after a long safety car period to recover a number of cars involved in a first corner pile-up he soon gave way to Plato who went on to score his tenth win around the Brands Hatch GP circuit. Before the race was run there was a tense moment for Turkington, as his third place was far from secure. The Airwaves Racing Ford Focus of Mat Jackson mounted an impressive challenge on the BMW racer, who was close to making a move stick exiting Clark Curve but backed out of it after slight contact with Colin’s rear bumper.

From that point on it was plain sailing for the 32-year-old, as challenges from behind faded and third place moved him into an unassailable points lead. The now double-champion didn’t dare celebrate until he’d had confirmation from his pit crew, but when the call finally came through the pit lane erupted to the sound of celebration.

Even the torrential rain of the late afternoon couldn’t dampen spirits as Colin was crowned in front of fans, friends and family. Watch highlights from the finale below: